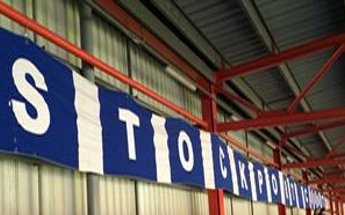 Chorley, after a poor start to the season, have recently found a way to win games, putting together a decent slate of victories that has resurrected their National League campaign…until yesterday …when they came up against the form side of that league…Stockport County !

Games twixt Chorley and ourselves are invariably tense evenly contested affairs and for a time yesterday that was how it was shaping up. Chorley had opened brightly and taken a not undeserved lead through Alex Newby just seven minutes in. It took County 20 minutes to reply effectively via a neatly executed goal from Nyal Bell, and another 18 and bits to take the lead courtesy of an aberration on keeper Matt Urwin’s part and steely determination from Festus Arthur drawing off his outings, earlier in his young career as a striker.

The second half was just a kaleidoscope of sensational goals as Bell hit the best goal I have witnessed in many a season in skinning the experienced Andy Teague before firing the most lethal of shots home, and Tom Walker followed this with one of similar ferocity.

The visitors nicked one back late on, but by then the game was won and County had sealed a valuable victory.

My mood was set earlier by watching the 1999 City v County classic ….just the ticket before setting off for Edgeley Park.

The faintest of drizzles made early note-taking a fair old hassle, but I managed to record the fact that Chorley were putting County under a lot of pressure from the off, an early corner giving a portent of things to come.

It took until the seventh minute for that prophesy to become reality.

Ex Hatter Courtney Meppen-Walter invariably reserves his best displays for games against County, and this was proving to be no exception, as his early work at the back and going forward marked him out as one of the game`s prime movers. He was to be overwhelmed by the excellence of County`s work later, but I will continue…..

No sooner had I scribbled that, than he added more grist to that particular mill by appearing inside the County box where he picked out Alex Newby with pinpoint accuracy. The pass was perfect, and Newby did the rest, his shot soaring beyond Hinchliffe into the net, via a fairly substantial deflection.

County replied, but having beaten Teague, Osborne saw his cross cleared, and Rodney fared no better seeing Urwin hold onto his shot as he cut inside down the right.

County were still largely finding life hard, and now I am in serious danger of repeating myself, as despite defending well, the clearances out of those defensive positions from County were not good, particularly from Hinchliffe who at best found touch.

Chorley meanwhile were playing the ball about nicely, but despite the early hick-ups County were able to survive without conceding another goal.

The Blues looked OK when they ventured forth, but Rodney was just unable to react quickly enough to prevent Urwin snaffling Osborne`s through ball with 16 minutes gone.

The 17th, saw Alex Newby end another dangerous sortie by going close with a shot, and this was followed by another Chorley free-kick after Chris Holroyd fell to earth in spectacular fashion just outside the box. Adam Blakeman took the kick, and this was only half-cleared by the Blues allowing Meppen-Walter a shooting chance which he regally spurned by sending his shot high into the upper reaches of the Cheadle End.

We reached the 25th minute watching Hinchliffe lift another clearance out of play disappointingly, he did better moments later though, holding Martin Smith`s shot, but the game ached for some controlled passing from County, rather than the long punts that were meat and drink to the bean poles at the back for Chorley.

And…..err within a minute that desire was translated into emphatic fact as Garratt and Tom Walker combined nicely down the left with Rodney whose low ball into the box was put away by Bell in superb style.

The County faithful were in high spirits now, but Smith did his best to put a damper on this, failing in his efforts, drilling his shot wide.

But…..there was an altogether better hue about County`s work now and Keane (who I thought had a terrific game) saw a neat cross headed over by Bell.

With half time approaching now, so Holroyd went centre stage for a time, firstly getting booked, prompting the referee Sam Garrott to have a word with the visitors manager.

Then with 6 minutes of the half left, Holroyd emerged again seeing a shot deflected for a corner after Alex Newby`s effort had been charged down.

Nothing came of the corner for Chorley, or a further shooting chance a couple of minutes later.

Would the game now just drift somnolently until the break? Well we all know that is not the way this County side operate ( evidence the number of goals that JG `s men have gleaned late on in both halves in numerous games), and they gave every indication of sticking to that modus operandi both Osborne and Walker engaging with the visitors backline with runs from deep- the latter unlucky to see his shot, on the end of it, whistle narrowly wide.

Then it happened…3 minutes added time was announced…..no…no……County scored!

Well indeed the 3 minutes (courtesy of Groovy Gang) was announced, but the significant fact was that Rodney`s run saw him cut inside before being brought down.

Inside the box? …….the referee thought not, and anyway it did not matter a jot as Osborne chose the moment to reprise his lethal free-kick at Torquay. The angle and position were different but the venom in the delivery was not and Urwin twisted around in mid-air trying to keep it out. He looked to have succeeded and then he hadn`t as the ball landed twixt him and goal with Festus rounding on him at speed- the pill ending up in the net giving County another late/late goal which the County number eighteen claimed with some relish!

There was just time for Rodders to get booked for a tackle on Meppen-Walter and for Alex Newby to send a poor effort wide for Chorley, before the teams went in with County sitting happily 2-1 up!

The half time pics start with the SCAN photo of Big Willow…..

The re-start saw County return to the attack.

Tom Walker and Osborne were in the van of much of this, but it was the impressive Keane who had us out of our seats as his shot took a late deflection.

A major melee ensued from the resultant corner, and I do not quite know how Urwin managed to keep the ball out of his goal midst the mayhem, but he did!

Play then switched ends a bit- Festus heading Newby`s cross out from under the bar, and Urwin again doing well to deny Bell who had broken clear, but the balance of play was now firmly in the Blues favour- Rodney unlucky to see a real rasper just miss out!

Smith did well next for Chorley blocking what was a lethal-looking run by Osborne 10 minutes into the half, but Bell was now warming up in menacing fashion for County, just inches away from adding a finish to a splendid cross from Walker.

Bell was buzzing, his pass to Osborne just deflected behind by one of a clutch of harassed red-shirted defenders. The pressure was on from the corner, Urwin doing well to punch out under the cosh. But the ball just came back as Turnbull found Keane with a cool pass, Keane missing out by the narrowest of margins, his shot fizzing at max speed the wrong side of the bar.

Chorley then brought former blue Lewis Baines on for Blakeman and for a short period they looked to dent County`s growing confidence , but Smith could only drag his shot wide of the target, and a further period of neat passing from the visitors promised much before floundering upon a wave of the Pop Side liner`s flag!

That was that …County then responded in comprehensive fashion, Osborne setting Keane up for more disappointment in the form of another shot that was so…so close without claiming that cigar!

Then came a moment to cherish….a moment of real class from Bell.

County were defending, and under some pressure, when Bell latched onto the ball deep in his own half.

Off he set, with the redoubtable Teague for company, his run taking him into the opposing box. I wager everyone of the 4000 plus specs thought `chance gone`…but no…..Bell put the naysayers magnificently to the sword with a shot of supreme power and accuracy that brooked no argument and left Urwin a helpless spectator.

That was the best goal of this and a few more seasons for me, pure class fit to grace the game at any level- just excellent!

County were now 3-1 up, and Bell was on fire, Urwin doing great work to beat him to the ball in front of goal with just over 20 minutes left.

For Chorley, Martin Smith was doing his best to lift his team , but he failed to test Hinchliffe with a shot,  did better a minute or so later by lifting a tempter into the blue box, but the County keeper`s punch out under pressure sorted that situation and kept County 2 to the good.

By now Chorley had all their subs on, County responding by switching Rodney for Thomas.
Smith continued to try to resuscitate the Lancashire team`s twitching corpse, but his latest effort carried the bar harmlessly with 18 minutes left, and the altogether more meaningful attacking play was being enacted at the other end where Mark Ross just managed to deflect a Keane strike behind for a corner that saw Palmer go close.

Credit to Chorley, they were doing their best to get back into it, and Alex Newby looked to be doing really well only for Hinchliffe to deny him with an urgent save.

With 12 minutes left Mulhern came on for Bell, but that did not signal relief for the visitors, who went further behind 2 minutes later, and it was another belter!

County were attacking with some urgency, and Tom Walker had the ball on the edge of the box, and then he didn`t as he unleashed a ferocious strike that threatened to lift the netting from its moorings! Wow, it was 4-1 and deservedly so, and the Blue Army were loving every minute of it!

Leesley came on for Walker with 4 minutes left to play positioning himself wide left in front of Garratt, but Chorley were still trying to get something for their dwindling number of fans to cheer, the interestingly monikered Nortei Nortey ( Ed: surely not!) bringing a decent save from Hinchliffe as 4 minutes added time was announced.

Only 1 of these minutes had been and gone when County conceded a corner with Newby and company pressing commendably. We needed to be alert and defend the kick… we were not…..didn’t….and Ntumba Massanka made us pay forcing the ball home from close in.

Alex Newby at one end….Osborne at the other both went close in what remained of the game, and the County faithful lined the hoardings at the end to salute a fine performance by JG`s team.

That was a decent win against a team on a run of form!

It was particularly heartening to see the tired old bromide “ whose going to score goals for us?` , answered again….just about everyone in this team!

That we also score goals at times when other teams are thinking of that comforting half time managerial pep talk, or of home comforts at the fag end of games, is a growing pleasure- a steely professionalism that has James Gannon`s name writ large through it!