A win away! County see off Spennymoor Town. 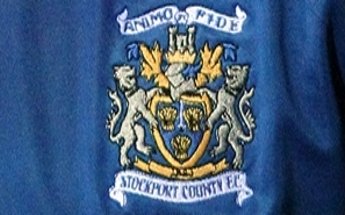 A scintillating performance from James Gannon’s Stockport County team saw them romp home in fine style taking all the points with a 3-1 win at Brewery Fields against fifth placed Spennymoor Town.

This was just the sort of response that JG would have been looking for in his widely underestimated team, and against opponents on a roll!
Town came to the fixture in hot form, having scored 15 goals in their last 2 games, and won their last game 7-1 away from home, so anyone who says that this game was a shoo in for County is well wide of the mark.

No, it was a terrific showing containing superb attacking play from the Hatters. This was particularly the case before the break, when with the returning Jake Kirby illuminating the wintry landscape with an all action performance that only lacked a goal, they looked well in control of proceedings. The second half asked more from County defensively, and a clinical and near flawless performance in this respect warmed old bones on the coldest of north eastern evenings!

With Thomas at RB it begged the conclusion that attack was the watchword in JG`s pre match talk, and that was the way it played out with County putting great pressure on the home back line, feeding hungrily off Kirby`s energy and verve.

But Paul Turnbull was back in the starting line up, and his partnership with the amazing Sam Walker was central to County’s showing throughout the 90 odd minutes.
Goals were the only missing element until Warburton obliged on 35 minutes with a belter, and Walker did even better slotting a terrific free kick home with 4 minutes left of the half.

It stayed 2-0 to County until 20 minutes from the end when the referee gifted Town a glorious chance to score, which they duly did, Brogan firing the cheapest of free kicks home.

So……… with the temperature plummeting, and mist swirling ominously in parts of the arena, a backs to the wall finish looked possibly on the cards for County.
However this prognosis ignored the JG Factor and his late substitution of the hard working and impressive Frank Mulhern with Nyal Bell, with 7 minutes left, was a veritable master stroke. Mulhern left to an ovation, and 12 minutes later so did Bell after he had scored a poachers goal in fine style to send the travelling County fans home happy.

A late flurry of cards littered the game’s final minutes, as tackles got ever tastier from the home side, and whilst I did not see this, I am told Walker (who had been grossly assaulted just a few minutes earlier) got a second yellow in the tunnel. I am tempted to say I am surprised at that, but I am not as the referee Nr N Cox deteriorated from irritatingly poor earlier, to downright abysmal late on!

Back at 7.45 over 600 assorted supporters struggled to keep warm as icy blasts of wind and an ominously swirling mist enveloped the stadium.

For County, Turnbull and Kirby replaced Osborne and Minihan. Minihan and Ossie were on the bench whilst Stephenson wasn’t. The early play saw County surge onto the attack with Kirby very much in the van.

Twice in the first 3 minutes Kirby pushed the home back line back, as Mulhern, Duxbury and Walker buzzed around energetically providing options.

Keeper Matt Gould was positioned perfectly to sort Kirby’s best effort 4 minutes in, as the sides swapped free kicks in the minutes that followed.
The seventh minute saw Town’s first sortie of note, and it involved Shaun Tuton, but he ran out of grass as he darted goal ward.

Five more minutes passed before anything of note happened, and it was a run from Mulhern, but when his pass set Warburton up, he lashed a wild effort high and wide.

That triggered a response from Town, via Tuton again, but having made it into the box this time, he found Duxbury on his case and that was that as far as any attacking chance was concerned!

County were looking ever more impressive now, and 14 minutes in, they had a free kick as Mulhern was fouled just outside the box. It was a surprise to see County play the free kick short, and engage in some neat short passing. Sadly though the end product was disappointing as Kirby sent his shot over the top to keep the game scoreless.

For Spennymoor I had Robert Ranshaw as their prime mover as he strove to spread play to the flanks to test County’s backs.

On it went, with County attacking, and Mulhern drawing the inevitable foul from the harassed home defenders. They had a free kick again and it was on the edge of the box. As usual we got the mime from Walker and Warburton before the kick, but Warburton took it and disappointed by not hitting the target.

Duxbury then tested Jacob Hibbs to the full with a couple of penetrating runs that stretched the home resources to the fullest.

No goal followed though, even when Duxbury again took the game to County’s opponents with a tricky run. Duxbury’s final ball from this was good, and Kirby, the recipient, might have done better, but instead his shot went a foot wide of goal.

Spennymoor were having their moments it must be said, but these amounted to time on the ball not goal threats, as County’s reshuffled back line defended well, with an offside trap that functioned to perfection.

Then Mr Cox incurred County supporters wrath by producing a card for Walker for a marginal offence (Walkers first). Cox had previously been content to wag a finger at a Town player who had fouled Mulhern (first foul), err it was Walker`s first foul too, appallingly inconsistent, although that said he did consistently ignore home fouls very nearly throughout.

With just 10 minutes left of the half, and Ramshaw having spread play wide for Town, being thwarted by good clean defending from Thomas, County, via Mulhern and Warburton put the skids under Spennymoor once more with enterprising play.

Mulhern’s shot took a deflection, and Boyes managed to find touch to ease the Town ills from the resultant corner. But the ills were about to get intense again, as with the referee ignoring the umpteenth foul on Mulhern midst an attack that was building in intensity (allowing advantage you might opine, possibly not I offer in response!), Warburton lashed a glorious shot home. There was a hint of a touch by Mulhern, but who cares – it was 1-0 to County and their support behind the goal went AS in response!

It took County just 6 minutes to double their lead!

Boyes had just headed depressingly wide at one end of the park, when Mulhern spearheaded a County raid that saw him harry Thackray into handling just outside the box (I saw no card). I saw what followed though, and Town were wholly duped watching the Walker/Warby thing expecting perhaps the mixture as before, but it was nothing of the kind, and Walker took it smashing a drive of delicious ferocity past the keeper into the net!

The half ended, with the score 2-0 to County, with another Town foul and County free kick, taken by Duxbury and thwarted as Mr Cox ‘saw something’ and nullified County’s efforts to snatch a third with a free kick to the North Easterners.

Kirby was still to the fore as play re-started, but although County probed the home back line, it was mainly Town enjoying possession- it was just that their finishing was dire, Johnson’s tame effort going high and wide barely a minute into proceedings.

Brogan joined in with a fine run, but this was not matched by his final ball that left Johnson flailing helplessly as the ball went out of play. ‘Where’s the Beef?’ I found myself scribbling in the rapidly cooling night air.

Where indeed? County had some, but Kirby saw his shot blocked, on 53 minutes, after County queued for a shot at goal at one point. Only Mulhern had a small measure of success in hitting the target around this juncture, and Gould was able to deal with the shot well.

At last, 58 minutes in, Town found their range, only for Hinchliffe to tip Thackray`s effort over the bar. Commendably, County defended the corner to perfection.

I just thought that I would mention at this point that for the 2nd time in 3 games an opposing player was allowed to take the ball out of play (a yard and a half this time) play being allowed to continue with County’s opponents on the attack. Appalling hardly covers it, but thankfully after Town won a corner, Hinchliffe sorted Tuton’s under par shot to stop my rant and keep it at 2-0.

Passed the hour and Osborne was on for Kirby, and another few minutes and they had leaked a goal. Spennymoor were struggling to make headway with a fairly typically laboured attack when Palmer was adjudged to have fouled his man smack in front on the edge of the box.

That was not good, and it got worse as Hibbs made light of the County wall by planting his kick home – 2-1!

Cowan replaced Warburton with 18 minutes left, and although his expected input might be thought to be defensive in nature, Cowan soon won a corner for his side linking nicely with Duxbury who saw his shot charged down and cleared not long after.

County were getting another whiff of something special now – a Cowan cross somehow cleared, Mulhern replying with a surging run that won us a corner. Mulhern got possession again from this only for Duxbury’s shot to clear the bar.

It was noticeable that two men were on Mulhern, as he, Dux and Osborne all had efforts charged down. As we went into the last 7 minutes of normal time.

At this point JG replaced Mulhern with Bell, as Osborne saw a shot drift inches wide.

Walker was carted not long after by Anderson as a fracas ensued near the far touchline with the County player on the deck. Anderson did get a yellow but then so did a plethora of County players as Mr Cox totally lost the plot in the game’s final minutes.

Credit to County, they were raising their game again deep into added time (5 minutes of it)- Osborne again going close on 93 minutes.

Notionally Town had a chance still, but not with shots like the one Anderson put out of the ground on 94 minutes.

It was getting a tad tense now, and then it wasn`t as Bell manufactured a goal from nothing, robbing Thackray before beating the keeper with an impressive finish.

Cue great scenes of celebration before and after the final whistle, as County fans and players signalled their justifiable pride in a good win !

No one should miss out on the kudos for this win – a glorious team effort, that the County supporters present just lapped up!

And well done to all who made the trip from SK3 to support them!

Because We Love Football