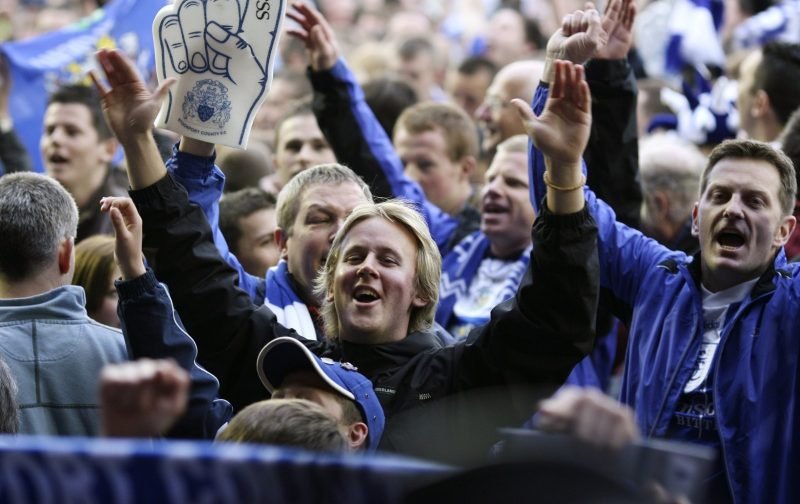 County ended the pre playoff part of their season with a decent home point, that secured the much sought after fifth-place finish ( and with it the home QF tie) in front of 6163 ( a new National League North attendance record!)today at Edgeley Park, against a determined Darlington side.

Those looking for a bit of a nerve tingler, bedecked with 90 odd minutes of none stop excitement, were perhaps disappointed, but they, if they existed at all, would have been in a minority I would guess, as most of the excellent crowd stayed on to applaud their respective teams at the games conclusion signalling if not overwhelming approval of the days fare, then satisfaction on the season thus far laid out before them.

If it wasn’t unceasingly exciting, the game was an interesting one, particularly so because County fielded a side with 7 changes in it, with a Wednesday playoff Quarter Final in prospect. Most of JG’s fringe players got a start…and it was a real excitement to see young striker Szymon Czubick on the bench.

Szymon got 15 useful minutes of first-team football under his belt by 4.45, and that can only be good from every conceivable angle- I expect season 2018/19 to be a productive one for County and for Szymon!

Another factor making this an interesting game was that Darlington seemed to want to win it. They looked quite neat at times, and at others asked the odd question of County, most notably 34 minutes in when Stephen Thompson took advantage of confusion in the County back line, to score.

If he was aided by a certain slackness from the blues, it was also true to say that another element, not unrelated to the Darlo forward’s progress, was the elbow that Michael Clarke sustained in the goals build up.

That said it was a decent game played in a good spirit, and rounded off with an equalising goal of some real quality from County’s Dan Cowan.

Harry Winter again did well, captaining a County side which fielded a back four of Cowan, Clarke, O’Halloran and Duxbury behind him, but in front of the returning Ian Ormson between the sticks. Joining Harry in midfield were Sam Minihan ( wide right) and Harry Brazel( anywhere and everywhere), with Dixon, Stephenson and Warburton completing the picture up front.

So…..with so many changes, could we expect that much in the way of cohesive moves from the blues?

Possibly not, but Dixon opened brightly enough, his languid gait unsettling the visitors on pretty much the first attack of any sort.

A foul was the recourse of choice on this occasion by Darlo to stop him, and when Duxbury’s follow up cross failed to pick out anyone in blue, the tactic had declared an early dividend.

County then suffered similarly to how their opponents had, Darlington gaining a free kick after Winter’s under-hit pass had put County in difficulties. The free kick was cleared but not the thought that we needed to concentrate more and tighten up.

Five minutes in and, for a moment, that last blast of pessimism seemed miss placed, as a sweeping move involving Warburton, Brazel ( who looked determined to shine)and Minihan turned defence into attack.

It looked so good in the build-up, but there was no way through what looked to be a decidedly obdurate Darlo defence, marshalled well by Josh Heaton and Jack Vaulks.

Dixon and Warburton were the unlucky men for County, and whilst we were not having any success, the style of County’s play augured well for the 80 odd minutes to come.

As I have hinted at, Brazel was looking lively at this stage linking defence and attack nicely, bolstered no doubt by the reassuring presence of Harry Winter bestriding midfield to his rear.

But we were flattering to deceive a touch, as some slack work by County sold Ormson short, the young keeper doing really well to dive bravely at David Syers feet with the forward poised to make it 1-0 and looking into an empty net.

Have I said that we need to tighten up?…Well….we did….it was good work by Ormson…. but not so as far as what went before is concerned!

Midst all this…Duxbury continued to skip clear down the left and ping crosses over, his latest, on 15 minutes, was his best yet but Minihan just failed to reach it with the goal gaping.

It was nip and tuck for a time after that last action, and although County kept putting Darlo under pressure, the closest they came to a goal were efforts from Minhan and Stephenson both of which were blocked – the first by Vaulks…the second by keeper Aynsley Pears.

Beyond halfway in the half, it was still 0-0, Winter shooting wide when put through by Minihan.

The 28th minute brought with it irritation as former Forest Green striker Reece Styche was allowed to dart clear when clearly offside.

It was not a great moment, and I shall await referee Ben Speedie’s memoirs for his reasoning on that one, but I nitpick I suppose as, despite being in a good position, Styche was ultimately dished by good work from O’Halloran, to keep it at 0-0.

Again it went nip….tuck…..Minihan close at one end…..Saunders frustrated at the other by blocks by Clarke and Winter.

Dixon did his best to alter this, cutting in from the right to menace Pears and his companions, but it all ended badly when the shot from the County number nine narrowly missed out, hitting the side netting instead of that to Pears’ rear.

Then, County nearly imploded again, as Ormson was once more played a bum hand as Saunders latched onto yet another under-hit pass. It looked another good chance, and Ormson had no right to save the day, but he did… again throwing himself at the feet of the forward snatching the ball with consummate timing!

Again…..great stuff Ian, anything but being the case for the defensive lapse.

That nonsense possibly undermined County’s confidence, introducing doubt, as they went one down in the very next attack. It started with an elbow in Clarke’s face, from Styche, that laid him out. Confusion reign at the back for the blues as Styche then fed Thompson who beat Ormson’s dive with his shot.

We were now one down, and try as County might in what remained of the half, that is how it stayed.

Dixon saw a shot rise and rise over the bar…..Warburton and Dixon tried and tried again to penetrate the tough Darlo rearguard, but without success.

And to add to County’s difficulties, Warburton had to have treatment, which meant that he did not re-appear for the re-start.

George West was the replacement for Warburton, and he was to show up well working hard and looking busy- sending George out on loan has clearly worked well.

Just 2 minutes into the second half and West was clear, and on for at least a pot at goal, only for the referee to blow for…..err……anyone out there know, please?

County worked hard, at both ends of the park- having to defend( which they did well) when Duxbury was penalised. The free kick was worked clear, and the blues attacked with a will in response- Vaulks doing well to thwart a West run, and Gary Brown just able to hack a Minihan cross out from under the bar.

Quite a decent duel was surfacing twixt West and Vaulks, and George was showing that his time away from playing football had toughened him up pretty much, thus Vaulks was going to have to work for what remained of the game.

Again ….and again…play swung…Clarke doing well to retrieve the situation, just before the hour, when Styche dispossessed O’Halloran in a dangerous position. Then the same County number five was really unlucky not to get a touch to a corner after Stephenson had terrorised the visiting back line.

It went on…..Winter making a terrific saving tackle under pressure……Clarke getting in difficulties……O’Halloran coming to County’s aid with some reassuring play.

It was disappointing to see Duxbury having to be replaced by Smalley just past the hour, however, and play had been interrupted for an age whilst Scott received attention. I was surprised to see the referee allow Smalley’s little sartorial pantomime that followed to run its course before he eventually came on and the game could re-start.

It was a throw that set the game going again, and it went to Cowan who set off for goal hemmed in and apparently cut off by sundry defenders. No chance of a goal then…he will pass will he not?…..but no….head down…over the ball, in the prescribed manner, County’s Mr Consistency smacked a real beauty beyond the keepers dive into the very corner of the net.

That was a real peach of a goal, and the County faithful let Cowan know that they knew it! The place was now a veritable cathedral of joy and noise, as all barring the largish Darlo following let rip their feelings.

Darlo were not done though…..Saunders shot over not long after the goal, but neither were Jim Gannon’s side …they showed every indication that they wanted a second goal too- West making it to the by-line, but watching as Brown stopped Dixon from doing anything with young George’s lay back.

There was activity on the County bench, with about 15 minutes left, and it looked like Szymon Czubik was about to come on. In response …for the first time this afternoon…the sun burst through drenching two-thirds of the stadium with its insipid none warmth.

Darlington had just seen another determined attack from them cleared by County when Czubik came on for Winter.

County now had a vastly inexperienced duo up front in West and Czubik, but somehow this looked the thing to do….not so much a throw of the dice by James …as a statement of his confidence in the talent of his young players.

In addition now, with Winter taking his well-deserved ovation, we had no `bites yer legs’ defender on the park( Dixon was dropped back deeper, but that was about all) but those players wherever they were positioned, worked diligently to the Manager’s plan and worked their socks off to see the game out with no further goals conceded.

West was running about strongly, but so were Darlo, and Vaulks rather blotted his copybook by dragging his shot wide of goal, with 10 minutes left, after Saunders had taken advantage of County’s inability to clear their lines.

The games only booking came a minute later as Portas incurred Mr Speedie’s wrath by attempting an early shirt exchange with Stephenson. It was a complement to Stephenson’s threat I told myself, but the referee sadly did not see it like that.

Credit to Darlo…..they were giving it a good go as we went into the last 5 minutes, had Glover done better with his shot……but he instead drilled a poor effort well wide, to the obvious disappointment of the large away contingent.

On it went…Styche clear…his cross picking out the well placed Syers, only for Ormson to excel himself once more by diving at Syers’ feet to grab the ball. He was stepped on for his pains too, but the save had been made and it was a good one!

There was the small matter of the celebrations though, and it was all very orderly…no pitch encroachment….nothing….just applause and happiness all around.

I just cannot wait for Wednesday!

Well done James and the team!

[ See the pictures from this record-breaking attendeed game here! ]
Stockport County line up