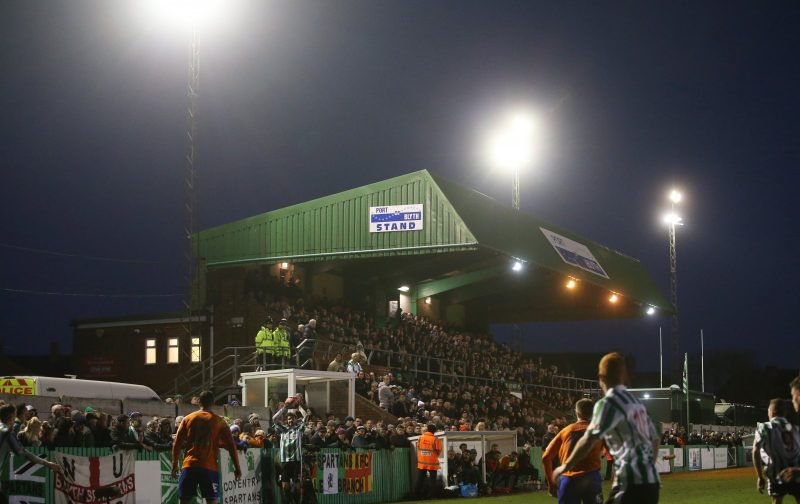 The Northumbrian side were worthy opponents and put up doughty resistance, keeping the Hatters advantage at 1-0, so this was definitely a good win…worked for and earned against a side that saw us off at our place earlier this season.

It was another well balanced team showing from the blues, and the opening 10 or 15 minutes or so seemed to promise a handsome County victory, so sweet were their moves, so present the threat from same.

But…..one element was missing and it’s a vital one….finishing…..and although Warburton and Oswell were on the end of much created by the likes of Winter, Turnbull, Thomas and Duxbury, it looked like ending 0-0 at the break for all that.

Enter Jimmy Ball….and with the referee thinking of blowing for half time, Duxbury’s pin point throw picked out Ball who did the rest beating the keeper with a truly superb finish.

The local ultras were incensed, but there again the language and general demeanour of same was less than well balanced before this, but the dye was cast , and having scored at the psychologically best moment, County then pulled out all the stops to defend their lead.

In this respect I would single out Smalley and Stott for particular praise. The duo’s work under pressure late on was excellent. I liked Bully and Harry in midfield too, such grafters and not without skill either!

Husbanding his teams resources diligently JG replaced Oswell, Warburton and Thomas with Stephenson, O’Halloran and Minihan in the second half and , whilst the pressure from Alun Armstrong’s side increased following these changes, those County players charged with sealing the win did the job with honours.

County opened on the front foot, and before I had sorted my position for the first half, Oswell, accompanied by Warburton, was in the clear with only keeper Peter Jameson between him and goal. But…before he could shoot, the referee acknowledged his liners flag and blew for offside.

Both Duxbury and Cowan were getting forward well, at this point but, whilst corners came County’s way, nothing more substantial.

Harry Winter meanwhile was bossing the park, looking in excellent nick, picking Warburton out with the neatest of cross field balls, with 5 minutes gone. Warburton quickly ushered the ball inside to Oswell but he could not apply a finish- chance gone!

Winter’s master class continued as he drove his colleagues in blue on one moment, tracking back the next to block a tasty looking run from Robert Dale.

Bully was not far behind Harry for kudos, and as a result, with County invariably first to the ball, and better at using same than their opponents, things looked good from a County perspective albeit that only 12 minutes had gone.

Then…..just 60 seconds on….and County allowed Spartans a glimpse of glory. It started with Winter losing the ball to Sean Read. From Read the ball went to Maguire, and it was a chance for sure. It was spurned however, the Spartan’s number nine firing hopelessly high over the bar.

Read followed suit within a minute, emulating Maguire’s lack of precision as County failed to clear their lines accurately enough.

County tightened up after those two lapses- Jameson dealing with a Thomas header with some ease, but failing to do similar when faced with a County corner. His inglorious flap, as the kick came over, was not a pretty sight but the referee John Matthews offered him relief in the form of a free kick.

I must say I was baffled at that one, but whilst Mr Matthews did not do well under pressure from the home specs who were overdosing on hysteria, giving County a plethora of cheep free kicks to defend late on in difficult positions, I have seen worse this season.

Twenty minutes had gone, and County were defending…and then they weren’t as Turnbull surged clear from the back to send a quality long ball missing out the home back line and picking Warburton out nicely.

He was clear and probably had time to spare, but instead of taking that time, Matty leaned back and lofted a poor effort high over the bar!

That just might have given Spartans a lift as straight off they attacked again and Mullen was not far off with a thumping drive that missed out narrowly.

Winter shot wide…..Warburton went closer, but there was no cigar for either County man, indeed they were under pressure again via David Atkinson’s ball, and thankful for Duxbury’s presence as he cut the threat off neatly.

County regained control after this and Ball was unlucky to see Jameson push his shot around the post after good work from Thomas.

The corner offered another chance, but Smalley’s header twanged the bar and the chance was gone.

Oswell did have the ball in the net, after 40 minutes, seeing the effort ruled out for offside, and County did force a series of late corners , but ,with maybe a couple of minutes left of the half, 0-0 looked the likely score line at the break.

And then Spartans made their supporters wonder if 1-0 to them might just be on as Mr Matthews obliged them with a juicy free kick in a nice position. Expecting the kick heading for goal, County could have been excused for packing the box, thankfully Bully thought otherwise doing well to snuff out a real opportunity when the kick went short.

Well thank goodness for that….0-0 then …not great…but not bad….but wait a moment…County were pushing their opponents back into their last third again, and Jameson and company had only just seen off County’s latest corner. However…..they now had a Duxbury throw to face, and before they could react he had found Ball with his throw and it was 1-0 as he volleyed it home from the edge of the box.

Before the ball could be kicked more than once or twice thereafter the referee had blown for half time to further incense the locals!

Within a few minutes of the re-start Stephenson came on for Ball, and in no time he was inches from adding the finishing touch to a cross from Oswell who had worked a small miracle to get the move that far.

The hour mark saw Blyth get the first of a prolonged series of pressurising free kicks in scoreable positions , but this one again saw Bully in his element charging it down, and County’s defensive cover held ensuring that Dale’s follow up shot missed out.

County were defending like the proverbial lions, and with O’Halloran in the mix now , in place of Thomas, looked to reassure their supporters that the lead was capable of being defended.

Both sides went for it…..Duxbury so close on the break for County……and O’Halloran and Smalley doing really well to stop the lively Jarrett Rivers who was beginning to look the same threat he was at our place earlier in the season.

The passes were flowing serenely at times from County-Just a finish was missing again-Warburton unlucky on the break with just over 20 minutes left.

For Blyth Spartans, Rivers and Dale were looking to be the primary focus of moves and County had to produce some of their best work in response- Smalley heading a Dale effort out under pressure.

Rivers was replaced soon after however having sustained a knock and Adam Wrightson, his replacement, was quick to get on County’s case.

Mr Matthews was not helping any either, and another free kick to our hosts saw Hinchliffe diving spectacularly to his left to make a save and keep Buddle’s free kick out.

Into the last 15 minutes we went with Minihan on for Warburton, and Oswell was unlucky , just unable to get a shot off after a move started by himself.

County were working hard to make the lead safe with a second goal, but they had to watch the back door as well, and Stott was on hand to do just that as Wrightson robbed Duxbury of possession.

Dale was the next threat as he jinked his way into the box. We thought the danger was over when O’Halloran stepped up and stopped the rot, but we had not reckoned with the referee, and he had given the home side another free kick. This hit the County wall to end the angst for the blues.

Roared on by a small but highly voluble following and aided by a run of cheap free kicks ,the attacks from Spartans were getting to be more frequent, and O’Halloran again did well to stop Wrightson’s run. From the loose ball there was a chance for the locals to go AS again as Reid’s extravagant dive earned his side yet another dubious free kick, and the entirely blameless Duxbury a word from the referee. Smalley and O’Halloran were again in the van of the County resistance that followed and the kick came to nought as a result.

It went on with Reid giving us a reprise, in the box this time, but with no one in blue within a country mile of him, Mr Mathews waved the penalty claims away, to more howls of protest from the locals.

With the game heading for the end, County were still trying to get a second –Oswell, Minihan and Stephenson stretching the home back line as far as they could. Winter was in the mix still also, but there was no one to add the finish when it was required as he turned a defensive position into an offensive one.

Beyond 90 minutes we were wondering just how long the referee would add on, bearing in mind the welter of breaks for treatment to Spartans personnel, who were obviously feeling the effects of having played on Thursday.

Stephenson went close with a dazzling run down the left that needed 3 men to stop him in the box deep into added time.

Stephenson- only one on him this time.

But after probably 8 or 9 minutes extra, and a number of corners and free kicks to Spartans, the score stayed the same, and County had won another valuable away victory and 3 vital points that consolidates their 5th place in the division ahead of the play offs.

Great stuff…..hard work too, but nothing of real value comes with no graft, and County had that and more….much more today, and that augurs well for what is to follow.

See you at Edgeley Park then next Saturday for County v Darlington!

There are loads of photos from this game that can be seen here!

So it looks like County have probably secured 5th place.

I think what that means is County would be home to face the team finishing in 6th place.

Win that we then play away at the third place side…. I think.

Get through that and we will be in the play off final… which will most likely be another away day (unless we are facing the team in 7th IF they get through.

I was a bit critical of this new play-off regime but it does keep the interest going given 7th place has a shout of promotion.

A final word… this site is undergoing some change – if you are having problems posting an article comment or logging in / registering in the forum please email membership@vitalfootball.co.uk

and your problems will be a thing of the past!

3 Replies to “County defeat Blyth. Is 5th place ours?”