County draw with the Stones in the Trophy 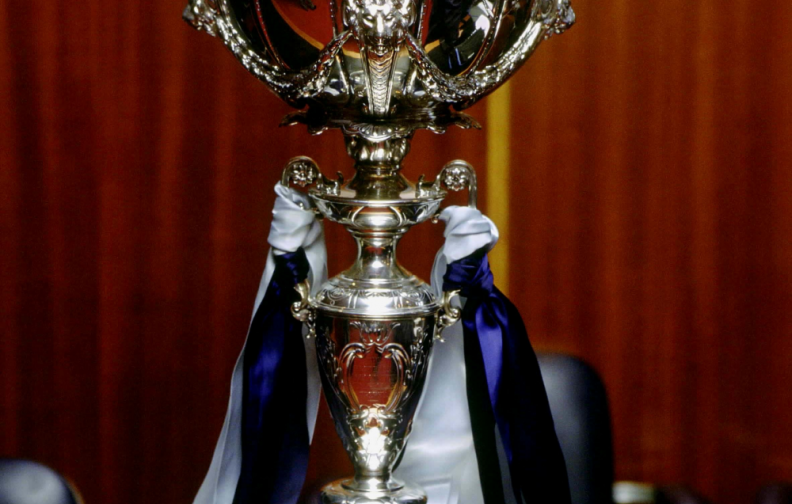 On a day when promotion rivals Chorley lost at home, County earned themselves a second chance to despatch National Premier Maidstone United in the FA Trophy via a Quarter Final Replay on Tuesday evening, with a 1-1 draw today at Edgeley Park.

It was the result that no one wanted….an extra game…and all the other extras that brings with it, but that’s how it is, and it was a decent showing from the Blues against a side a division higher than them, if truth be told.

In fact apart from the early minutes, when the Stones, backed by a vociferous following of just over 100, that included a way above average drummer, looked a touch bullish.

County got their bearings after that opening salvo from the visitors, but just when all was starting to look fine….it wasn’t…as Cassidy nicked one for the men in yellow and black, as the County back line were caught napping.

It took County just about 10 minutes to pull the lead back, and it came, unsurprisingly, via Warburton from a Walker corner.

One apiece at half time looked a decent enough platform from which to attack in the second half, and avoid the dreaded Tuesday night replay, but despite enjoying the majority of second-half possession and attacking, a winning goal eluded them.

Minihan got the M.O.M award, and that was about right, and no one really looked out of place, in a somewhat lacklustre game, against supposedly superior opponents.

Despite all the negatives surrounding an unwanted Tuesday evening replay, I feel that County could well do the biz, I only hope I can make it there as the Flyer will not be running for the first time for yonks!

The opening minutes saw Minihan and Thomas probing for an opening down the right, but apart from an early corner (that came to nought) there was nothing to show for some enterprising play.

Maidstone meanwhile began to push on, but there seemed no real threat on the end of the diligent build up, and  Jake Cassidy epitomised this, sending an under-powered effort sailing straight into a static Hinchliffe’s arms.

Yes…… not for the first time this season…..County looked the team ‘most likely to….’, and this was emphasised by Minihan and Warburton who combined to rattle the Stones cage somewhat, but Warby`s effort on the end of this drifted across the face of goal before going out!

I continued to be encouraged, when Stephenson won a corner, again but County could not prise the visitors’ defence open.

That said….Stephenson did find the woodwork…twice in 2 minutes between 11 and 13 minutes, both from Palmer`s assist, but it stayed 0-0.

Had either effort gone in…. the game might have ended differently, instead United took the lead.

It started with a series of throws down the right from Maidstone, that County blocked but could not clear. Thus….the scene was set fair for Cassidy who latched onto a loose ball inside the box to slam the sweetest of finishes beyond Hinchliffe into the net.

Eighteen minutes gone…..one down, but County have been there before, and recently, so I felt no sense of panic set in, even when Hinchliffe had to look sharp and tip the ball over the bar under pressure from Paxman not long after the goal.

County had their work cut out at this stage, and Walker and Warburton got in some tenacious work to keep the blues in possession and on the attack.

Keane, unsurprisingly, was in there also and he almost sent Stephenson in, after 26 minutes, whilst Warburton saw his effort from just outside the box deflected into the arms of keeper Chris Lewington.

That was disappointing, but Minihan and Thomas made up for it with brass plated knobs on next – winning a corner with a repeat of their earlier wing craft. The kick was kept out, but Keane wasn’t , and he picked out Warburton who swivelled in familiar fashion to leather the ball home!

It was 1-1, and County, via Minihan, kept the pressure on, but when in a good position, Sam ignored Warby inside to his left, and the raid petered out when Davies cleared his lines for United.

Nothing of real quality was coming back at us from Maidstone, although Hinchliffe again had to fend off an up and under, tipping the ball over the bar once more with yellow shirts on his case in numbers.

And….with half time approaching the visitors did increase their work rate, pushing County back, and Baines did really well to block a darting run from Michael Phillips.

A corner followed that Stephenson ran clear, then more pressure as Maidstone pushed on for a late reward. They just may have thought that they had one, as added time was called, as a fiendish ricochet saw the ball reach Elliott Romain. He was in on goal…and then he wasn’t as a crucial last gasper from Minihan saw the danger off magnificently.

That was the first half put to bed, and when the teams returned to the fray, Duxbury had been replaced by Turnbull.

It looked like three at the back now…..Palmer, Keane and Baines, but it was Maidstone who were doing the early defending, Lewington doing well to snaffle the ball from a County free kick.

Phillips did sneak a free kick on 52 minutes, but County defended this well, Thomas`s block being decisive.

Back 3 or nay…Baines was getting forward, linking with Stephenson….Keane…..Walker, but there was no joy for County, who then found themselves back defending – Stephenson doing well to run the ball out of the danger zone …up the park.

The hour mark saw Mulhern on for Bell, and twice in as many minutes shortly thereafter, he was in the mix, and decidedly unlucky not to get an affirmative nod ( and a pen) from the referee as he went down under pressure in the box.

County roared on by the crowd, piled it on now – Minihan in full cry, winning a corner that both Bains and Palmer fancied but just could not put away.

Maidstone in reply could only point to a shot from Paxman, on 74 minutes, but Hinchliffe did not need to respond to the effort that went high and wide.

County were missing the attacking outlet that Duxbury provides at this point. Whilst Baines, Walker and Stephenson were working wonders down the left, Scott’s attacking nous was definitely missed.

Stephenson again went close, as County surged into the visitors last third, but despite a series of free-kicks and corners County could not get that vital second goal, indeed….with Palmer up with the forwards, Thomas did well to block a break by Maidstone ( that back door again ).

Walker, with Keane, was pushing County forward, and United were distinctly rattled- more than happy to find touch with pressure from County mounting.

Into the last 10 minutes we went with the crowd roaring loudly as a surging run from Stephenson won the blues another corner. Again Palmer was up for this but sadly disappointed to see his header saved by the keeper.

With 2 minutes left Kirby came on for Baines.

I have no idea what our defensive line up was now, but it did not matter as County were still attacking…going for that goal that would save us from a Tuesday from hell!

A corner came from this, the ball running loose to Minihan, to a chorus of “ shoot…shoot” from the Cheadle End Choir. Shoot he did, but the ball was deflected behind for yet another corner. This was headed out by one of a line of defenders, but when Walker sent the ball back in again, the liners flag ended the raid and the chance of avoiding a Tuesday replay.

Game over, and a good result against opposition from a higher division.

That said a replay does us no favours really. So it will be interesting to see what team we field on Tuesday.

The result at Chorley really reinforces my belief that this is County’s year, thus a FA Trophy run further protracted would, arguably, impede our progress.

That said…we have been there before….96/97 …67 games played in league and various cup competitions…and we ended up promoted!

Nil desperandum…..get to Maidstone if you can – I will get the prayer mat out and pray for a lift!

2 Replies to “County draw with the Stones in the Trophy”