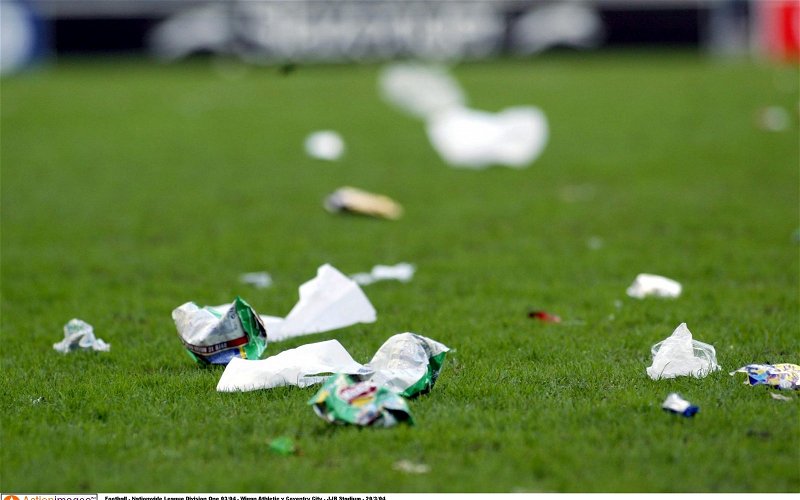 County’s promotion push took a hefty knock  today at St James’ Park, where a somewhat disjointed showing saw them end up losing by the only goal of the game  against in form Brackley Town.

I say in form. but that did not show at all from the Northamptonshire side against whom County keeper did not have a shot of any significance to handle in the first half. He had maybe two shots to stop after the break, and the second of these saw Lee Ndlovu win the game for the Saints.

Town had been held together by  Shane Byrne who was up and down the park all afternoon to good effect, and galvanised further by Matt Lowe through whom all their forward moves flowed.

County’s reply to this was muted, and hindered to a degree  by an over reliance on high balls into the box which were dealt with routinely ,for most of the time, by the home side`s bean pole back line.

If the returning Baines struggled handling Lowe, defensively County, with Palmer kingpin for me, were never unduly stressed. Indeed the angst was mainly at the other end where, as the game wore on, a familiar pattern of over vigorous tackling and time wasting became a feature of Towns play, with referee Scott Simpson never really getting a grip on any of it.

That said, we have been there before, and this season, and overcome better opposition, but today’s bottom line was that ultimately we just did not do enough to win the game.

Pre match was excellent…..2 superb hot dogs at the first rate catering unit at the ground, followed by a pint and good conversation in convivial company, before the team sheet revealed that  County’s starting line-up showed five changes from Tuesday at Boston, as Baines, Minihan, Walker ,Osborne and Kirby, were in for Duxbury, Thomas, Turnbull, Warburton and Stephenson, the first 4 of whom were on the bench.

Brackley were first onto the front foot, pushing forward via Lowe down the right, but whilst his cross found willing legs on the end of it, the move came to an abrupt end with a wave of the liners flag.

Minihan was taking up the Thomas role and he and Cowan linked up nicely a time or two , but without there emerging a scintilla of a chance.

Soon enough 10 minutes had gone by, without too much of the action imprinting itself on the memory. Mulhern did  nip clear onto a through ball, 12 minutes in, but was pulled up by the referee for `something`.

The next minute saw a cross ping over from Lowe on the right, but Ndlovu , had a ‘legs in treacle’ moment and could not get a shot off, allowing County to clear.

Lowe was certainly the perceived likely outlet for Town , but 20 minutes had now elapsed and Hinchliffe had not had a shot to stop.

The same could probably be said of Danny Lewis, twixt the sticks for Town- County were getting forward, but not finding the target- Mulhern unlucky when the ball flew over the bar from a typically cheeky attempt to charge down the keeper’s clearance.

County were beginning to get good possession in the opposition half, and Kirby was drawing more than the odd foul from the home defence, but we needed the quality from these to be up to our recent high standard. However…. 23 minutes in the latest set piece was half cleared. Cowan did well to ping the ball back where it could do damage, but after Mulhern saw his shot charged down, the move ended with the ball rising up and over the bar from Minihan’s strike.

Armson and Ndlovu meanwhile kept plugging away for Town, each though finding Palmer in imperious form stopping the rot for County.

The half hour mark came and went with County still trying to pick a way through the home back line, but Keane`s high one into the box was dealt with easily by Lewis after Walker and Cowan had combined to good effect.

Two minutes on, and more good work at the back from Palmer saw County get another free kick when the ball eventually reached Walker , who was upended with County looking for an opening. They looked in vain as Osborne`s kick was cleared.

We were just 8 minutes from half time now, and within a minute we might have seen a couple of goals , had both teams been sharper.

The first chance fell to Brackers, as…. perhaps looking for County to nick one any minute, I looked up to see Ndlovu slip by Stott and head for goal. It did look a real chance did this , but the forward put his shot a foot wide with Hinchliffe expecting the worst.

Hmmm….that was an escape for sure….but within a minute it was County`s teeth that were a gnashing, as Walker sent Mulhern to the by-line with a neat ball. Frank did well to avoid his marker and get his cross off, but …meeting it… the advancing Palmer sent his header over the bar.

Back came Brackley through Lowe , but although he skipped beyond Baines well enough, he found the excellent Keane positioned nicely to cut the danger off.

We went into the last 5 minutes of the half with County still getting a raft of free kicks, but not taking great advantage of them- Stott just managing to win a tussle with Ndlovu after Town broke clear from a blue set piece.

Walker shot over, following good work from Cowan and that was that as far as the first half was concerned.

The second half saw Warburton on for Kirby for County – the first five minutes seeing Minihan to the fore for the blues, and Lowe doing his best to get Town in gear.

Brackley  looked increasingly harassed as County pressed forward , but the first half`s pattern was repeating itself as County won free kick`s (the latest after Warburton had been floored) but could not find the required cutting edge from the set pieces.

It went on…Osborne carted by Byrne , with only a word from the referee. OK there was another free kick, but Walker curled this one straight into the keeper’s arms.

Then an elbow from Ndlovu on Palmer again only brought a word from the unwise Mr Simpson – the free kick was cleared.

We were beyond the hour now, and Mulhern had just won a corner, that saw County , urged on via Osborne and Warburton`s efforts ,pushing  ever more insistently for that decisive opener.

It did not come…somehow Brackley held out!

The 64th minute saw a shot by Walker clear the bar by inches, and the 65th saw Duxbury on for Minihan, enabling Osborne to drift over to the right.

A free kick to Town, put County under pressure , with roughly 20 minutes left, but again Hinchliffe was not troubled – Duxbury running the ball clear to relieve the County angst.

Byrne was doing sterling work for Town, as County piled the pressure on through Warburton and Duxbury- the latter winning a corner, that Glenn Walker headed clear with a clutch of blue shirts on his case. Osborne kept the attack alive, but when the ball reached Walker a hand stopped his attempt to ping the ball into the danger zone.

In time honoured fashion the referee awarded a free kick a couple of centimetres outside the box….. this hit the wall from Walker, and when Palmer`s follow up header cleared the bar the raid was over.

County kept pressing, and then ..calamity…as Byrne ran the ball clear …twice in rapid succession he did this, and twice Lowe went close-the second time bringing a decent save from Hinchliffe. The ball was loose however , and County could not react quickly enough allowing Ndlovu to slam the ball home to give Brackley a lead they were probably surprised to have.

There was still just under 15 minutes left, and not long after JG brought Thomas on in place of Baines, and within  minute or so Adam was inches away from Warburton`s through ball in the box.

County were trying hard to get an equaliser, but Lewis excelled himself with a double save to keep out efforts from Keane and Mulhern, and the County impetus took a knock via the irritating double whammy of an offside flag in response to Frank`s effort…and the long rest that Lewis then took for repairs presumably.

Eventually…it seemed eons…..play resumed with a foul by Byrne on Mulhern as County  pushed  their opponents back.  If the  resultant free kick offered hope, it soon vanished as firstly Osborne`s kick was poor…and secondly Lowe managed to run it clear forcing Hinchliffe into rapid action to curtail the danger.

The frequent rest periods added up to 5 minutes added time, but this only saw an extended version of the time wasting as Glenn Walker went to earth to eventually hobble off at a funereal rate. Incurring as he went the wrath of the large loud County following.

County kept attacking deep into added time ,but without really ever looking likely to upset the Brackley applecart.

Hinchliffe did his best to help, vacating his area and pushing up the park, but I was happy when he abandoned this stratagem – having almost been caught out at one point- a bone headed Town foul undoing them as they broke clear with Hinchliffe stranded elsewhere.

Soon enough the whistle signalled the game’s end – a disappointing result for County, and a real boost to Brackley’s promotion chances.

We were bound to lose one at some point, and this was always one of the most likely losses, so we do not need to panic- stay cool and trust in JG to sort matters. We are still well place to progress both directly or via the play-offs, so hang on in there County fans- you were excellent today…the singing…the flags…excellent….keep it up…we WILL do it!