County see off Darlo. Top spot is in sight! 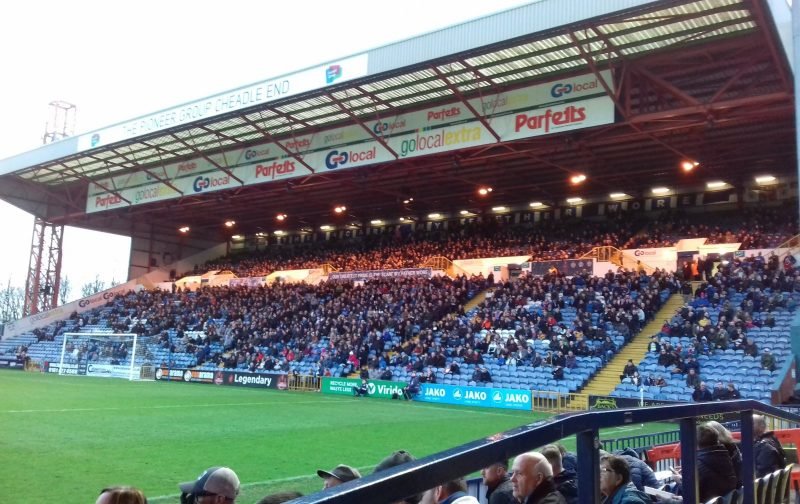 Stockport County`s promotion push got a massive boost today as they saw off a decent challenge from Darlington with a 2-0 win in front of almost 5000 at Edgeley Park.

I saw no one anything but mightily pleased, after the match, with what had been a good win and an excellent 3 points- won well against a side determined to look for a win themselves.

The win began to look even better with the news that Chorley, the only side ahead of County in the table, had had to settle for a point in a 0-0 draw with Chester.

That narrowed the gap twixt the leaders and ourselves to 2 points, with the Blues having a game in hand as well as a fixture at Chorley to come which they will fancy they can win!

Goals from Adam Thomas and Jordan Keane sorted the victory for County, who for long periods of the first half had to bide their time as Darlington took the game to them. Coherent sustained attacking from County during this period was in short supply, largely due to the visitors’ impressive appetite for possession typified by Ben Jackson’s energy at the back allied with the work of Steve Thompson and Harvey Saunders up the park.

As I say…..not that much was coming back from County in terms of attacking, but a foul on Osborne undid Darlo smack on half time, as Thomas nicked one from the resultant free kick.

One nil at half time was a result for the Blues, after a testing first 45 minutes, and when Trotman saw a second yellow and left for an early bath, not long after, things only improved for James Gannon’s team who doubled their advantage just after the hour through a Keane strike, and never looked back thereafter – Darlington doing well, in the end, to limit the damage to 2 goals.

Back at kick off time, there was another big crowd inside EP, including several hundred from Darlington who were making max noise in support of their team well before the off.

Jordan Keane for Sam Walker and Elliott Osborne for Darren Stephenson were the only changes on view as County took the field to a warm welcome from all 3 ( occupied) sides of the ground.

The early minutes saw County attacking, but without testing Jake Turner in the Darlington goal.

It was all fairly routine stuff to be honest…until 5 minutes in that is…when Jamie Stott was called on to produce a marvellous tackle to stop Harvey Saunders on a marauding run deep into the blue half.

It was slightly surprising to see Simon Ainge back in central defence for Darlo, but he fully justified the move with a last-ditcher to foil Thomas as he strained to latch onto a bouncing long ball in the box.

Jackson headed the resultant corner clear, and was seen at the other end of the park not long after seeing a decent shot neatly kept out by the unrufflable Ash Palmer.

Eleven minutes had soon gone by, and it was all a bit disjointed from County, faced by dogged defending and determined running from their opponents, who had definitely not come to roll over!

Cowan’s lively form continued, his run and cross offering something for Bell to have a go at, but his header flew over the bar.

Kneeshaw was looking useful for Darlo at this point, but…put though by Thompson, he saw his shot, on 14 minutes, saved well by Hinchliffe, with a dive to his right.

The away block was still making a lot of noise, and you could see why, as their team were harrying County very successfully indeed, making them work hard to contain them.

Bell did try to lift the mood, trying a snapshot from outside the box, but it went high over the bar to send it plummeting again.

Matters did not improve greatly though, as County conceded a free kick, but thankfully not a goal, as Ainge’s header from same was kept out by the last line of the blue back line.

Twenty minutes in, and Darlo were still working at producing a surprise result, but they could not find a way through the well organised blue barrier in front of them- Kneeshaw’s work to spread play to the flanks eventually to no avail.

County were largely pinging it long from the back,, which just saw the pill head back in their direction, but one such ball out of defence, on 21 minutes, saw County win a corner. With Palmer up for it, and going for it a possible opener looked notionally on, but though the County number five got a header in, Referee Richard Aspinall saw a climb and rewarded Darlo with a relief giving free kick.

For all I have said about County not putting together much in the way of cohesive moves, Cowan made me eat my words on 25 minutes, his run and cross teeing Warburton up for the neatest of flick on’s that Turner did really well to keep out with an outstretched leg!

Yes….I was revived a touch by that one!

But…..County came under some heavy pressure for a couple of minutes after that last action, being unable to clear their lines without finding a yellow shirt after Romal Palmer had seen a shot blocked.

Then Osborne showed us the way…..relieving pressure, not with a punt up the park, but by running the ball clear( he won a throw as well, and applause from the County bench too).

County made some progress after this, via a couple of corners, but nothing more than that, and Darlo continued to nibble away at County nethers….Nicholson chief nibbler at this point making it to the by-line, but no further despite an enthusiastic( but erroneous) ‘handball’ appeal from the Darlo fans.

Saunders went close around this point, and Palmer came to County’s rescue after Hinchliffe fudged a clearance putting pressure back on the blues via a throw, but half time was nearing now and no doubt a word from JG would sort anything that needed sorting at the break.

Then things took a turn for the better, Bell’s thrusting run being blocked by Darlo captain Terry Galbraith. That was good from Darlo but then Ainge fouled Osborne as he surged forward on the follow up. The free kick was delivered to the back of the box where Palmer rose and headed it on to Thomas who fired it home!

Yes definitely so, if a touch harsh on Darlo, who despite winning a fairly dubious corner in the 2 minutes added time that followed, could not get back to parity before the teams went in for the break.

My second half was to be as challenging as that of anyone on the field of play, being surrounded by hordes of youngsters obvious thoroughly enjoying the occasion but in very close proximity to my camera.

But for Luke Trotman, his afternoon took on a rather different hue as his foul on Osborne, earned him a second yellow reducing the visitors in number to ten. Duxbury’s kick offered much, but despite much harrying from M.O.M Keane, it stayed 1-0.

Corners came thick and fast for County now and Stott was only just kept from one such ….

New man Jason Gilchrist came on for Nyal Bell not long after- the next corner seeing Stott get his header in this time, but send it over the bar.

With Warburton in an industrious mood , County were on the up now, but Warby’s shot from outside the box cleared the bar.

Osborne headed wide, and Thomas shot tamely into Turner’s hands, so it was getting just a little frustrating to not get a second goal, although much credit to Tommy Wright`s side for making it so.

Then…..things changed for the better again, as Cowan ( who had provided the cross for that earlier Ossie header) pinged one over again , the pass just being kept from Gilchrist by Ainge. It was a corner however and with everyone and his dog wanting the ball…Keane made it his and slammed it home , to make it 2-0.

With Turnbull and Cowan cutting off  any notional Darlo break at source, County piled it on after this- Warburton twice going close with efforts that on another day…………

That said, the blues might have leaked one , with 12 minutes remaining to play, as much hesitation abounded at the back for County as Nicholson was played through, one and one with the County keeper. The forward was favourite for sure, but no one told Hinchliffe and the attempted lob that followed ended in his arms!

Thompson epitomised the Darlo ethic…still running the ball out of defence to relieve pressure , and tracking back to thwart Duxbury showing admirable sportsmanship in the process!

So credit to Darlo…..but they still could not find a way through that blue back line, even when Osborne offered an assist by fouling  Tom Elliott, Thompson could circumvent the County wall, with the free kick,  but not County’s keeper.

That stung County back into action and it took Turner two attempts to sort Osborne’s shot with just 7 minutes left.

With Stephenson now on for Thomas , County kept pressing, and Gilchrist was unlucky to find Jackson and Turner on his case as he went for a loose ball in the box.

There was time for a couple of saves from Hinchliffe…one from Elliott of some quality, and the other…a lesser stop to deny Thompson who was still running deep into added time.

Keane set Bully up for a shot that was charged down , and it was pleasing to see this had been set up by Gilchrist who tracked back and won possession with a Darlo break on the cards- good stuff I thought.

So was the result….not the prettiest of displays but who cares…3 points is 3 points…and more so in the current National North context!

Well done County, and well done Darlo for making a decent fist of things and largely keeping it clean!

Catch you all at Hereford then!

[ The action in the sunshine can be found in these pics! ]

2 Replies to “County see off Darlo. Top spot is in sight!”