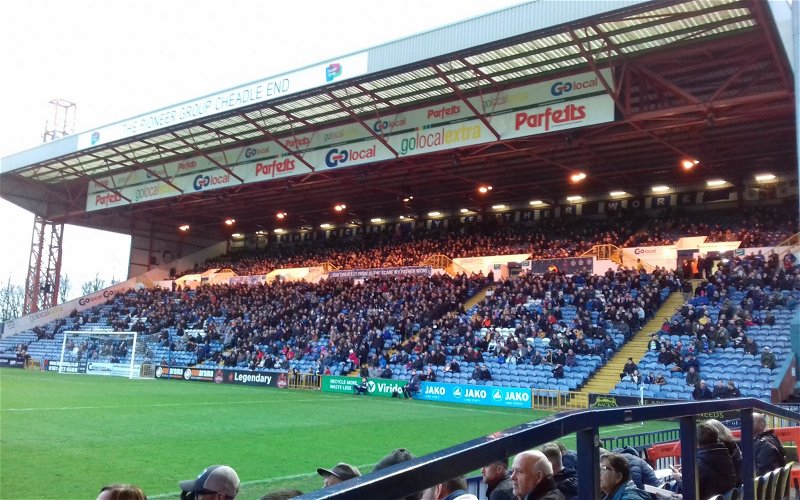 With just one game left in the regular National North season, Stockport County surged back to the top of the table today, securing a deserved 2-0 win against Curzon Ashton at Edgeley Park , whilst in the North East erstwhile leaders Chorley went down 1-0 to in-form Spennymoor Town.

Wow…..what a climax to an amazing season this is turning out to be as County will now go into next Saturday’s final game of the season 1 point clear of the Lancashire outfit, in the certain knowledge that a win will send them up as Champions!

County were quick to establish control against the Tamesiders, Ash Palmer getting the opening goal 6 minutes in. A palpably delighted and relieved Matty Warburton added a second 20 minutes later whereupon a decent……. spirited showing from Mark Bradshaw’s side prevented any further damage being inflicted.

For County it was great to see Warburton get back to scoring again, and his busy game merited that reward. Frank Mulhern got a welcome start and rewarded JG’s confidence with a M.O.M performance that only lacked a goal.

County’s approach was  just what was required….ball on the ground….. mostly….allowing thoughtful moves to be put together, and the whole team contributed to that.

JG sent out a well-structured attack orientated 11  for this crucial…must win…..game, leaving Turnbull in place in the midfield spine along with Sam Walker, but preferring Adam Thomas to an orthodox FB/ WB at the back alongside Palmer, Stott and Duxbury.

Osborne and Kirby filled the attacking midfield roles which meant that there was no place for Stephenson or Keane except on the bench, where Ormson and Minihan were joined interestingly by Gilchrist.

No one flunked it today, but I was particularly struck by the industry of Warburton, Kirby, Thomas and Mulhern, but the same could easily be said about the other 6 outfield players, and it was brilliant to see Hinchliffe eschew the long punt largely electing instead to frequently and affectively roll or throw the ball out by hand!

If the air was full of tension pre-match, this all dispersed in as joyful an ending to a game I can remember, but more of that later…

Back at 3 o’clock there was still all to play for, and Curzon opened hostilities with a shot from Ryan Brooke that went narrowly wide.

This was a rare moment of excitement for the 75 who made the short trip from Ashton, but their enjoyment was short lived as Mulhern celebrated his return to the starting 11 by forcing a corner.

Luke Wall busily cleared the flag kick, but in response it was immediately apparent that Hinchliffe was going to be altogether more measured with his clearances this time around , and with County’s outfield players responding in kind, and keeping the ball down, some real progress looked on the cards.

This came in the form of another corner, won by dint of Duxbury’s energy and verve. This found its way beyond the far post where lurked Ash Palmer, and it was 1-0 as he fired home to a mighty roar from all but 75 of the 6000 crowd.

This seemed to buoy County up no end, and Kirby almost added a second goal, on the end of some neat play from Thomas and Mulhern- his shot going just wide with the keeper beaten.

Thomas stepped up again not long after, Kirby just kept from his cross by good work from Oliver Thornley for Curzon Ashton.

On it went…..County still keeping it neat and tidy, and Warburton won another corner after Mulhern brilliantly kept the ball in play. The kick was cleared, but despite it looking promising for the visitors for a fleeting second or so, their break fizzled out almost as soon as it started.

Then we got a bit of a mini shock, as keeper Cameron Mason’s high bouncer almost sneaked under the bar, one bounce, Hinchliffe just managing to tip it over in time. Shock over, Palmer blocked the corner allowing Warburton to busy himself tidying up and winning a goal kick.

Credit to Curzon Ashton- they were working hard, and it took a determined effort from Turnbull to prevent Cameron Mc Jannett’s darting run from getting somewhere.

The 24th minute saw Hinchliffe go long himself, but like at Chorley, the policy almost back fired, the visitors able to launch a counter attack from the badly directed clearance. Wardle shot wide from this, but not by that much!

Perhaps learning from that last action, County hit their opponents with the sweetest of moves next, taking in Warburton and Thomas initially then Mulhern before the pill reached Kirby. I was still luxuriating in the majesty of what was happening when it went up a notch higher as Kirby found Warburton with a lovely pass, and it was 2-0 as County’s prolific number 10 spanked the ball home, sparking off scenes of jubilation on and off the field!

The pressure from County steadily built after the goal – Kirby’s energy forcing Thornley to concede another corner. Palmer’s shot was charged down from this, as was a further effort from Warburton who was in great form.

Thomas was doing OK too, but unlucky to see his shot, 31 minutes in, go inches over the bar.

Mulhern and Thomas kept the pressure on – Mulhern just kept out by a clutch of defenders as he eyed his seventeenth goal of the season.

All the while Walker and Turnbull were establishing  a firm grip on mid field, and Walker was angst ridden to see his shot cannon off a defender for a corner, with 3 minutes left of the half, after Mulhern and Warburton had set the chance up.

The corner was not great, in fact Curzon were able to break clear from it, their over enthusiasm contributing to Hinchliffe being able to advance from goal to clear with Wardle showing a decided interest.

It was developing into not a bad game, and County’s opponents were making a reasonable fist of keeping it competitive – Hinchliffe having to punch clear under pressure with just a minute remaining to play.

We then saw how much better County’s  ‘defence to attack’ methodology was today – Warburton adding more gloss to Hinchliffe’s defensive work by running the ball up the park from deep.

This brought Osborne into play (and he was playing his part for sure) but his luck was out, his shot  fizzing and spitting its way across goal and narrowly out.

The half ended with County attacking as Walker threatened to punish a poor ball from Curzon’s Chris Rowney. But a foul on Warburton stopped the move albeit ushering in a chance via a decently placed free kick.

The kick saw Turnbull test Mason with a veritable rocket of  shot that the keeper did well to keep out with his legs. Osborne was similarly out of luck with his follow up effort and County went in still 2-0 up.

Warburton opened the second half with  a shot but Mason dealt with this calmly to steady the visitors ship.

Duxbury was soon warming up again, but Mulhern was just foiled on the end of Scott’s pass, by Mason.

Mason came under real pressure for the next few minutes, both Osborne and Mulhern forcing Thornley to concede corners. Mason was unruffled by the flag kicks punching clear/holding as required despite being under pressure.

If Mulhern was miffed at being thwarted by Joel Senior’s timely block around this time, Duxbury must have been more so as his drive, dispatched from the left touchline, twanged the bar with Mason a spectator.

Things were beginning to build nicely now for County, only some luck with the final ball was lacking, as Warburton found to his cost as Kirby’s cross narrowly eluded him in front of goal.

The 58th minute saw Hinchliffe go long, and Frank won a corner from this – Palmer seeing his shot charged down.

Then the hour mark brought County’s first personnel change as Kirby (off to an ovation) was replaced by Stephenson who was received rapturously by the crowd!

There was no let up either in County determination to keep on attacking, or their opponents commendable will to resist, but the 65th minute saw County get a free kick that looked to be in Walker’s territory. He duly obliged with an in-swinger, only for referee Ben Speedie to see ‘something’ and penalise the saintly Dazzer.

Dazzer’s halo slipped slightly 2 minutes later as his shot went inches wide on the end of a decent move, as that sought after third goal continued to elude the Blues.

The halo however was back in place not long after as Stephenson’s brilliant work  very nearly bought Frank a goal, and would have had not Mason intervened beating the County number nine to the pill narrowly.

I could just visualise Frank crossing Mason off his Xmas card list when this element was underlined with added emphasis as the keeper made a brilliant save to beat out a terrific drive from the County forward.

We were into the last 12 minutes now, and County were attacking with Walker and Turnbull still keeping a lock on the mid field …keeping pressure on.

This lock was of course not 100% indeed John McAteer managed to fashion a break 2 minutes later, but Hinchliffe made the save to keep this out and the score 2-0.

Then the place erupted and the Cheadle End….. was up cheering and clapping.  My first thought was “Spennymoor had scored v Chorley”…..but it turned out it was till 0-0 there ,but Chorley had just missed a spot kick!

Wow…..despite the doubt…you could sense something special was in the air.

I almost missed the final County changes midst the excitement (Minihan and Keane for Warburton and Turnbull) , and a Stott header that cleared the bar with just 2 minutes left.

I distinctly saw Palmer go close to adding that third from Osborne’s pass though, as 3 minutes added time was announced.

Mulhern then saw a shot drift wide, as the place erupted with joy again and this time all 3 stands were celebrating (the newly formed Glenn Taylor Fan Club – as the Spennymoor sharp shooter had just rose to nod in a 93rd minute winner before disappearing neath a forest of legs against Chorley).

It really was  special……….it almost did not matter a jot that Hinchliffe was pressed into service gathering the ball urgently as the visitors commendably kept plugging away.

Then the whistle ended the game and we knew that County were back on top of the table and well set for that title!

That was truly superb…..the team…..the management…the supporters were excellent ……each playing their part to the full.

Just one more push at Nuneaton next week, and James Gannon’s team and its long suffering supporters will  at last taste something other than a bitter harvest.

More sleepless nights to come before that inevitably , but believe….believe !