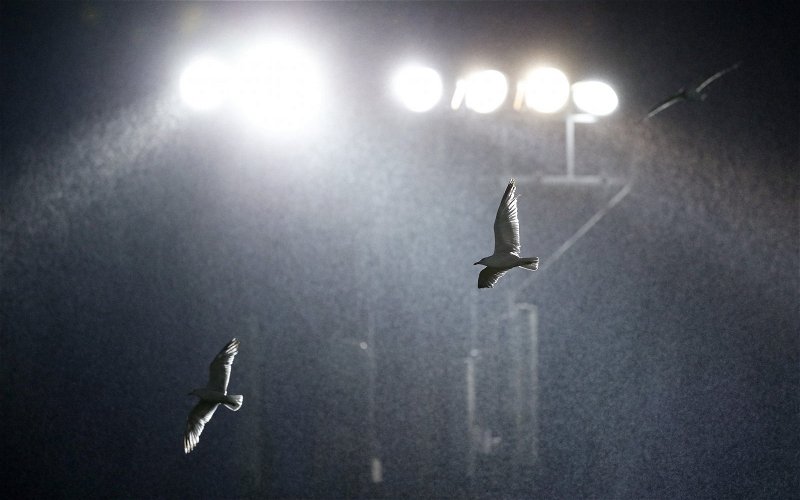 To many this result felt like a defeat, our late/late goal being cancelled out by one in the fifth of 4 added minutes from Daggers, and to be sure it was truly disappointing, but with both sides consistently failing to produce anything of value on a cabbage patch playing surface, it was hardly an unfair result in the end.

County had new man Lois Maynard starting, and he did well, showing signs of what he will do for us going forward with some neat work at the back along with a telling ball or two going forward that, with a better response from others, might have paid dividends.

The blues also had Connor Dimaio back and he was given a very welcome start, and I thought that, without uprooting any trees, Connor did well in the 65 minutes he was on the park and deserving of another start.

But …inevitably it was Danny Lloyd who topped the bill for James Gannon`s side with another all-action showing that merited more reward than it got- due largely to the excellence of home keeper Elliott Justham.

Hinchliffe did well too, and at times was as busy as Justham, and the blue back line`s work probably deserved the clean sheet so cruelly denied by the Daggers last gasper.

Yesterday was not the greatest of days to be sure, and the day before was only marginally less so having realised that, for the second consecutive away match the host club would exercise their right and deny old hedgie pitch-side access.

No matter……over 40 turned out at ridiculous o`clock to board the Flyer, and the day`s first `howl moment` happened just before the A500 on the M6 where, with the coach doing circa 60, a pigeon crashed headlong into the drivers windscreen departing this existence post haste. Mark the driver avoided any hint of a swerve as a result and most onboard were thus blissfully unaware of the carnage.

The sun was out upon our arrival, but once within the walls of the stadium it was only shining on home specs, the large County following being housed in the West Stand under the roof of which the sun never penetrates!

County opened on the front foot with Maynard showing up early and well, sending Lloyd surging clear. Only a corner followed, but the pressure remained largely on our hosts, albeit both Cowan and Thomas were called on to make timely interventions as the minutes ticked by, and the first save by either keeper of any note came from Hinchliffe who kept House`s effort out with his legs, some 12 minutes in.

Already though, at least from where I sat, the pitch looked a tad lumpy and not wholly conducive to a passing game, and much of what followed was, as a result, not massively entertaining.

Still, both teams were up for it, but for Daggers, Deering could only lift a limp effort over the bar, something both him and House would repeat a time or two more before the game ended, whilst County`s Lloyd looked on as Justham`s legs did for Danny`s effort on the break.

The rest of the first half was rather forgettable, although there were a couple of moments where County just might have nicked one, starting with some excellent work from Maynard and a lovely weighted through ball that had Bell`s name clearly on it. The County striker`s reactions, however, were not quick enough, thus giving Justham just enough time to react and nick the pill off his toes.

Then….with half time almost on us, Cowan`s throw reached Lloyd and his response was a shot that fizzed toward the top corner before Justham kept it out with his first brilliant save of the day, sending the teams in at the break with the score 0-0!

No half time photos obviously, but some comment about what went on during the half time break.

Well…..I have mentioned the state of the pitch already, but a tractor was unveiled during the break to wide acclaim being the focus of a campaign that had raised £15K for the host club.  They even had a tractor sons…..yes they did….and they played it too us as well. It really was a moment, but …unkindly I suppose, I could not but wonder whether the state of the pitch and the presence of the tractor were in any way related?

The second half was soon underway, but no great improvement on the first as far as compelling football and excitement went, oh….and Deering was still having a go for Dag & Red but without his radar plugged in. House was another trying to work something for Daggers but with similar results as Deering, and his best work, just before the hour, found Hinchliffe in top-notch mode in response denying the forward with a fine save.

I must say that the player in white/red that impressed me most though was Manny Onariase who was all easy movement and timely interventions game long! Onariase was the reason much that County were trying to achieve did not quite work out!

A double subbing on 67 minutes saw Dimaio and Bell swapped for Minihan and McAllinden, and Minihan`s input, wide right, slowly began to show his high point being a low cross that picked Lloyd out nicely giving him a sight of goal. Again Lloyd was on target but so was Justham and a brilliant diving save kept it at 0-0!

It really did look all over a 0-0 game, but JG brought Jackson on,with 2 minutes left, for Clarke, and within seconds a fantastic drive from him was tipped over the bar in brilliant style by the Daggers keeper!

County were revving it up for sure, but surely it was too late wasn`t it?!

But County did not think so forcing their opponents into their last third once more with only seconds of normal time left. Keane had a go as the ball came down in the box….he could not force it in….but the ball ran on to McAllinden and he could, smacking a beauty in off the near post – a cue for delirium in the away end!

That really did seem like `game won`, but it wasn`t….and deep….deep…into added time a  loose ball from Minihan allowed Daggers the late break on goal they craved, and when the ball reached substitute Kandi he made no mistake- that was the second `howl moment!`.

It was more or less the last kick of the game, a game in which pretty much only the last 5 or so minutes imprint themselves on one`s consciousness.

No matter… a point is a point and helps us consolidate our position, and we should get behind JG and his team starting with Edgeley Park on Saturday and the game with Bromley.