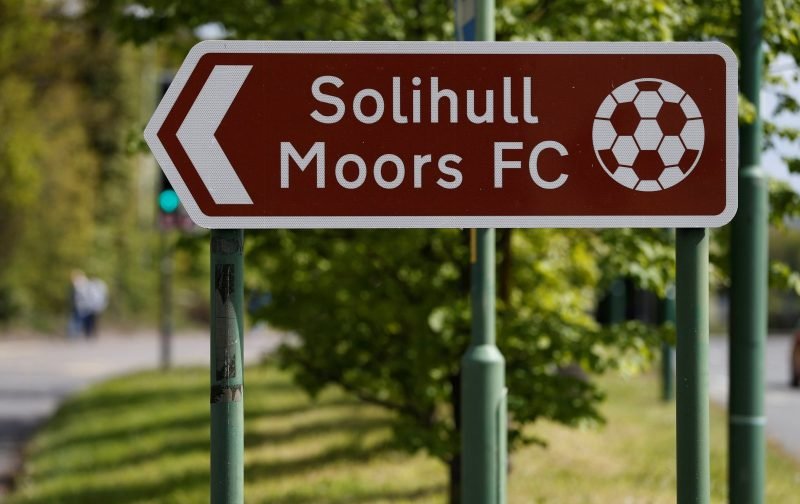 County came away with nothing from Damson Park last night where Tim Flower’s Solihull Moors ran out 2-0 winners.

If it ended up being a bleak night for JG`s men, it might easily have finished rather differently with a kinder shake of Lady Luck`s condiment dispenser.

Yes, the white-shirted Blues arguably shaded the first half, in which Moors ,whilst maybe enjoying more of the ball at times than County, looked no sharper or likely to end what at that point was stalemate.

That situation appertained into added time ( all 60 seconds of it) whereupon County became the victims of  the selective application of the rule book as a blatantly foul Moors throw was allowed to stand resulting in Walker being sent off , the ball having struck his arm on the line from the resultant shot.

It may have been a penalty …..it almost certainly wasn`t deliberate…..and the throw that set it all up was gruesomely outside the laws of the game. I thought I had seen the last of players being unable to deliver a simple throw within the rules, when we exited the Conference North – I was wrong, and a referee up with and consistently applying those rules too would be nice, but alas Gareth Rhodes and his assistants were sadly lacking in that respect.

Oh…. and Ben Hinchliffe saved the penalty in brilliant style!!

That normally would have sent County in at the break in a contented mood, but facing Moors with only 10 men offered up an altogether different prospect in the concluding half of the game.

That was pretty much how it panned out as well, as a brave rear guard action from a County side largely content, understandably, to exist on a diet of occasional breaks from deep, was undone by headed goals on 52 and 62 minutes for Moors.

Back just before kick-off it was my pleasure to speak briefly with Tim Flowers who I remembered from his time at Edgeley Park way back.  The same good humour so apparent then, was so again – a good moment!

The match started with both sides having a tilt at the other – Hinchliffe in action cutting off a Jamie Reckford ball in the crowded box, and Thomas following this with one of his leggy lung bursters, but this like a few more later, found no takers.

It was pretty much even, and the first 7 minutes closed with Moors having to defend a free kick, which brought unwarranted thoughts of an early County goal into my addled head- thoughts dispelled quickly as Leesley sent the free kick flying hopelessly wide.

This state of affairs continued with neither side producing anything likely to test either keeper, typified by Callum Howe`s strike for Moors on 15 minutes, that promised much but flew a yard over the bar.

Arthur and Hinchliffe combined nicely , a minute later, to see Gavin Gunning ( signed today by Moors) off, but another 60 seconds almost saw the white-shirted Blues nick the lead, as Leesley`s delivery from the left screamed across the face of goal with Mulhern straining a gut to reach it…inches from it!

This was interesting stuff all right, and County gave us some more – home keeper Ryan Boot doing well to punch clear under pressure after County had forced a corner.

Inevitably, a reply was due from Moors, and duly came and Cowan did well to deny them after the home side had stolen possession with County pressing.

By this point Mr Rhodes was already beginning to annoy me greatly ,his inclination to see a foul where none existed being his chief fault- he warmed up 23 minutes in with a free kick to our hosts, for almost nothing- they made a hash of it…..but…….

The 24th saw a response from County, but Dimaio, who had looked up for it and involved, shot into the arms of keeper Boot.

On it went with County pushing on but a rare blooper from Thomas ruined his otherwise impressive run, the ball ballooning high over the bar.

It was at this point I remembered that I had the ` first half added time` option on the Fingerpost Flyer first goal thingy, and I began to twitch with 28 minutes gone!

Meanwhile Lee Vaughan was attempting to stoke things up for Moors  following good work from Festus, with a stinging rasper that Hinchliffe did well to keep out- provoking the first volley of `In the Middle of Our Goal…..` from a decent County following behind him and to his left.

Into the half`s last 10 minutes we went with County responding via Leesley whose cross won a corner off a hard- pressed Liam Daly. Hopes were high as the kick pinged over but were seen off there being too many bodies in the box for a clean strike to count.

Then, with just 8 minutes of the half left, Thomas brilliantly stole the ball from Reckford adding to the excellence with a pin- point ball inside to Dimaio. He was nicely positioned but his underpowered effort was snaffled hungrily by Boot.

That was a crucial moment for me- score and we just might be set up, as it was, we had given our opponents a life.

They looked to capitalise on this, only for a neat catch by Hinchliffe to thwart them.

Mostly however, County were looking the more likely lads, with Turnbull urging them on by example – a corner threatened our hosts equilibrium, but their captain Kyle Storer eased their pain by locating the whereabouts of the far touchline.

This action was another crucial bit of play, as from it, Moors were able to break up field forcing Keane to concede a corner when worse was in prospect. County defended this but at the cost of a throw in. I did not clock who took the throw but I did  see the total wakes he made of it , and it did not look good indeed it looked worse when the referee allowed play to continue and a shot struck Walker`s arm on the line.

The referee waved his red card at Walker, and Moors had themselves a penalty which Yussuf sent to Hinchliffe`s left……but Ben was equal to it his dive enabling him to make a fine save!

That was a terrific save…it had also robbed me of £35…..but who cares?

The major concern was facing another 45 minutes with only 10 County men on the park!

County made a spirited fist of things when the game re-started, Turnbull seeing a shot charged down as Moors were forced onto the defensive, but it would not last as Vaughan re-opened his aerial assault of the Hatters defences. Festus got some decent heading practise in under pressure, but after conceding a corner, County`s dam was breached as Howe headed the flag kick home beyond the back post.

Credit where it is due- County came back at their opponents through Thomas whose powerful run forced Liam Daly to strain every available sinew to put the forward`s cross our of play. The corner from Leesley though was poor and any notional chance was gone.

But the County surge was short lived, and Moors were soon able to push them back again, Mr Rhodes obliging with a tasty free kick in a useful position. Yes, it looked scoreable even though Keane had the County defences organised suitably, but the home side made a Tommy Walls of it, an elaborately choreographed mime involving 3 players fell apart hilariously as Gunning saw his poor effort sorted by the white shirted defenders.

That was heartening, as was some fine defensive work by Thomas next, but his attempts to make profit from this further up the park fell flat due to lack of support, and Moors were back in County faces again.

It was not long before Vaughan added his two- penny worth in the form of another pin-point delivery from their right that unfailingly picked out the unmarked Reckford who duly obliged by heading home.

That was pretty much it really with County now 0-2 down, and JG met the situation by bringing Bell and Osborne on for Mulhern and Dimaio.

On it went with McCallum ( just on for Yussuf)sending a diving header just wide for Moors who were enjoying ever more possession now, a point emphasised by Hinchliffe pushing James Osborne`s shot round a post decisively.

Moors ultras, got a tad excited from the corner that followed- they thought that they had scored- they hadn`t, Gunning `s effort had come back out off a post, a fact that gave the good County following (233) one of their few happy moments of the night.

We were 20 minutes from game`s end, and Hinchliffe was now fully employed- another good save from him seeing off a decent strike from Reckford.

It continued with Hinchliffe in the van of the County resistance as Moors piled forward in pursuit of more goals that just would not come. Hinchliffe was in top nick doing well again to prevent a third being nicked by Mc Callum who had one of those `legs in treacle` moments trying to force the ball home almost on the line!

County made an effort to reply with 17 minutes left, but Osborne`s shot was a foot over the bar from a Thomas pass, and not long after their final personnel change saw Jackson on for Leesley.

County had much pressure to withstand in what remained of the game, and overall their back line performed well, particularly Festus, and Keane too- both putting their body where it hurt in the County cause, as Vaughan and Reckford continued to ping missiles in from wide positions.

Pushed …I would award M.O.M to Minihan who battled hard throughout and ran his socks off at times but there was no support at all when his powerful run took him into Moors last third late on. He looked disappointed….I was too, but tired legs maybe dictated the absence of friendly faces backing Sam up.

County remained largely under pressure in what remained of the game, with just the occasional spasm of resistance up the park to lighten the Brum gloom.

There was time in the game dying embers for the man in black to top his previous worst of the night, by booking Festus apparently for a bad haircut, but quite how he could see it with the County man`s head swathed in bandages I will never know!

In the end to keep it to 0-2 was a creditable showing with us down to ten men for half the game.

We were well up with all Moors could throw at us until the foul throw and Walker moments, so some perspective is called for in any criticism aimed at JG after this game.

Games were always going to be lost at this level, and we were advised early on before the season commenced, by JG, that the Blues would have a serious load of adjustments to make to the demands of this division which is peopled by full time squads and decent teams who, by and large, have had their `adjustment period`…done it…and emerged stronger.

It`s our turn now, and I know that JG will be on the case and sort matters given our support and patience.

See you Saturday at Edgeley Park for another tester against Torquay!