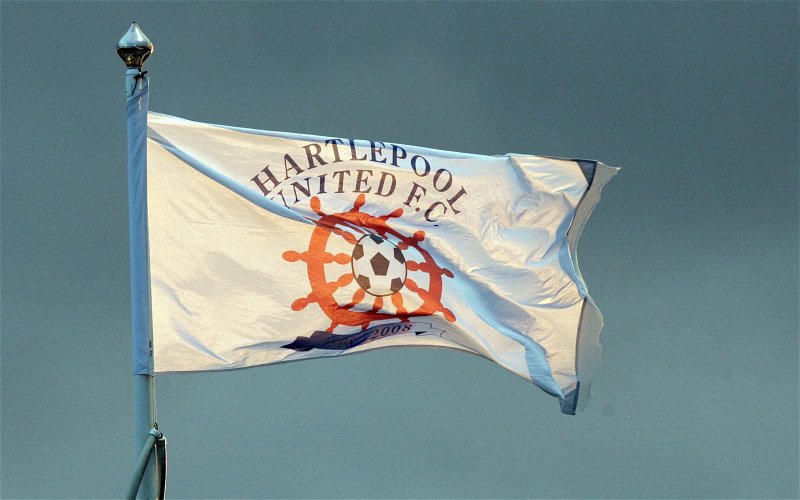 So, it was back to standing with County Supporters today for old hedgie, following the actions of Hartlepool United FC in refusing the writer and Andrew Machin pitch-side access- question…did you see an overabundance of photographers pitchside today?

Thankfully County fans responded brilliantly sending in their photos, taken during the game, and these are the sole pics used in this report, and massive thanks are due to County Supporters Gemma Wilson, Keith & Kevin Lee and…. Andrew Machin who sent  3 sneaky ones in, for their support with this one.

Circa 2.50 or so I was even more impressed as the same supporters filled the chill northeastern air with a brilliant selection of suitably bullish County ditties- the atmosphere was fantastic….electric even.

Then the game started, and it all went somewhat downhill!

From the off Hartlepool went on the attack, and Palmer did well to block Featherstone`s shot.

That was 2 minutes in, the 3rd saw Osborne set the large County contingent roaring by darting clear, but the Pool defence did what was necessary, and the roars subsided.

The third had Arthur and Hinchliffe tested to the limit by Toure on the break, thankfully the County twosome prevailed, but it was an early warning, heeded by Cowan almost straight away as, in concert with Thomas, he did enough to see  off a raid instigated by Keena.

Cowan then switched ends getting a neat cross over, but Osborne fluffed his lines and any notional chance was gone.

County tried to step it up next, and Lloyd looked aggrieved not to move the referee as his shot struck ( the arm of?)  a defender. No penalty apparently for that one , nor the one that followed on from it almost immediately when Thomas was brought down.

Pool eventually got the relief they craved in the form of a free-kick that put the pressure back on JG`s men.

I was impressed, on 8 minutes, as Clarke saw off 2 men to launch a County attack, but there was no real cohesion about their work thereafter, settling too many times for a hopeful ball up the park.

In contrast Pool were tidy and purposeful, invariably finding their man with a pass that would do County no favours at all. That purposefulness showed again, 12 minutes in, and Hinchliffe covered his angles brilliantly, doing well to keep a strike by Donaldson out.

Toure dragged his shot well wide in the follow up to that, but again, we had been warned, we needed to get the ball….keep it, run with it, but would we?

It went on, the tide not turning noticeably…Toure firing tamely at Hinchliffe one moment, Holohan doing altogether better the next, but watching as the ball flew 2 foot wide.

On….on… Hinchliffe diving to push Kitching`s shot out, Lloyd doing excellent work at the back in concert with Arthur and Clarke as County struggled to put a counter move together.

We reached the 19th minute before anything of real note came from County at the sharp end, and it came from Lloyd as his header was tipped over the bar by keeper Beeney, after good hold up play from Archer had facilitated a cross from Thomas.

That was the first time Beeney, reputedly a keeper of distinctly moderate capabilities, had been made to work, and regrettably a feature of what was to follow saw us largely fail to test this theory out to any great degree.

Twenty minutes in, and Southam-Hales shot cleared the bar, and a fairly nondescript period of play then followed, with neither side overly working the other.

Sadly, this was to end 10 minutes later in regrettable fashion as, faced with  Hartlepool pushing on and playing to feet, County stood off…and they did it once too often allowing Shelton to ping a cross over. Now…..I was far from convinced at this point that the Pool number 29 was not offside, but the officials gave that one scant consideration, and Toure did the rest, sliding in to push the ball home.

Bummer…..but on the balance of play, that was marginally no surprise.

What we needed was for County to keep working at their game, and …bare minimum…..do the basics correctly ( set pieces- corners, free kicks, even throws ) but a foul on Archer following a run by Lloyd , only resulted in the poorest of free kicks from Osborne- notional chance gone!

But…. County were now attacking more, and the free kicks were beginning to pile up now, but the latest was another rank bad one , and Beeney comfortably held onto a Festus header after 2 corners in rapid order came and went for County.

One pattern was emerging now -it was that Dave Challinor`s side were none too particular when it came to dishing out tackles of an `agricultural` nature, which in the absence of anything other than a word from Mr Evans( latest in the line of distinctly under par referees to delight us with his presence), they would continue ad nauseum, and one such `tackle` came next on Lloyd with 5 minutes left of the half.

It was a challenge that, in the absence of an adequate response from the man in black, we really needed to punish ourselves, but instead another poor free-kick only served to extend our agony.

The final minutes of the half saw Hartlepool come back at County – Cowan and Palmer doing well under pressure, the former doing particularly well to deny Kitching as Southam -Hales` cross bounced his way at the back post.

The whistle for half time was a welcome relief, but the hope lingered that…possibly…maybe…with us attacking the away end for the second half, we would see County take hold of proceedings!

Bell was on for Clarke when play resumed which saw Cowan now on the left of a 4, with Thomas on the right.

The play was being enacted in the County half though as Keena forced an early corner. Palmer headed this out, but the ball came straight back to Holohan who thankfully lifted his shot over the bar.

This went on…..Hartlepool attacking…but County were standing off and were lucky to see Holohan`s next effort fizz wide.

Five…six minutes went by in much this vein. Whilst a second Pool goal was avoided…no sweat I suppose up to a point, Holohan put the cat amongst the County pigeons with a smart run in behind our backline. A pass to Keena and the cat was about to feast as his pull back was helped on to Shelton who doubled the home side`s advantage by slamming the ball home!

The pressure from Pool was almost none stop, where was the County midfield in all this? Nowhere really and Hinchliffe was now vying for M.O.M with Lloyd as he managed somehow to hang on to Holohan`s sharp strike on 53 minutes.

Another thought resurfaced- when were we going to test the keeper?

Meanwhile at the other end Hinchliffe was called on for more heroics fending off a shot from Shelton. More followed on from this, and Lloyd did just enough to put the same player off as he surged clear with a shot in mind.

Eventually County fashioned a reply but Palmer`s header flew wide after Thomas had been fouled by Kitching ( need I say to no discernible rebuke from Mr Evans?).

Minihan was now on for Archer, and McAlinden replaced Turnbull 5 minutes later.

Bell and Palmer went close during those minutes, but not close enough, and still, barring Lloyd`s first-half effort, Beeney was still awaiting a suitable testing.

And…Hinchliffe was still coming up with the goods keeping a strikeout from a Pool free kick with under 20 minutes left.

Back came Pool through Shelton who sent Keena clear. The pull back from this was blocked, and I was pleased to see McAllinden run the ball clear from deep. His pass on to Osborne was good too, but he was upended by the none too fussy Holohan ( booked?…I hear you ask…err….no, Mr Evans was dreaming of the Sunday roast by this time!).  Festus then headed over from the kick to increase the angst.

Credit to County as they took the play to their opponents with less than 10 minutes remaining of the game. But that pattern emerged again….when clear…Osborne was fouled by Shelton. Naively perhaps I was still wondering about a card, when play intervened and Beeney at last had meaningful work to do, having to dive to push Lloyd`s free-kick around the post.

Corners came and went as game`s end approached, without County ever looking like capitalising at all- even my plaintive call for a penalty as Bell hit the turf under pressure in the box ( perhaps ambitious) came and went also without reward.

Well….refer to the litany of fouls perpetrated by Pool game long …without card, then check out the 84th minute of the game when admittedly McAllinden did perpertrate one of equal naughtiness.

The first such by County….he is carded- how often does that happen…too often, but no matter the referee had now moved on to what to watch on TV on Sunday!!!!!!!!!!!!

Again though…credit to County…………they were attacking now, and Beeney had a wee wobble or two, neither Bell nor Festus able to apply a finish from a corner midst all this late activity.

Into added time it was good to see Lloyd, who had worked hard at both ends today, still running..cajoling…trying, but Festus headed over from one of his late corners and that was pretty much that from a very disappointing match.

Lots to be done then to keep us in the hunt for a playoff place, starting with Dover at home next Saturday.

Hoping to get back pitchside for that….but of course…not holding my breath at all!