No fun in the sun as County fall to Maidenhead 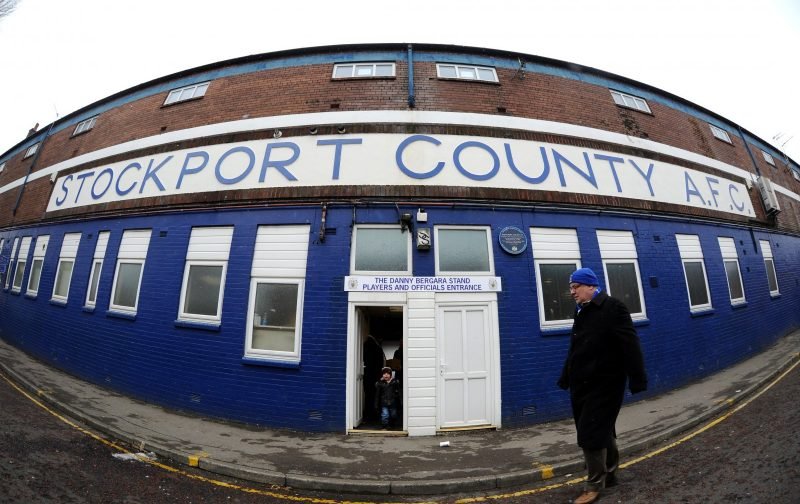 Disappointment awaited a good sized crowd at Edgeley Park today as County lost their first game back in the National Premier 1-0 to a feisty Maidenhead United side.

I say ‘feisty’ because there were a number of overly vigorous challenges today from United, that yellow cards hardly met at all, but referee Simon Mather contented himself with the paler of the two cards in his armoury when on at least 2 occasions more was required.

If I was miffed at that element , the  angst was magnified a thousand fold 30 minutes in, when blatant hand ball of Turnbull’s incoming free kick ( following a gruesome foul committed by Seth Twumasi on the then rampaging Dan Cowan) by the same defender resulted in nothing in the way of admonishment.

Had County got the penalty at that point, with their attacks building nicely, the game might just have taken on an entirely different complexion, but alas we did not get one….and it did, but only in the second half when United took over!

Yes…… Maidenhead came out for a game after the break, having allowed County to shade the first half. Their vigorous stuff was supplemented by more frequent forward pushes. But……taken over the 94 minutes or so of the game, it must be said that Hinchliffe had only 2 efforts of any consequence to stop. The first went in, and he pulled off a spectacular save to keep the second one out.

So….on the ratio of shots on goal alone, County probably should have nicked this one. Taye Ashby- Hammond, in goal for the visitors, was the busier keeper for sure, doing well to keep a plethora of chances out. The best of these fell to Kirby, but he somehow contrived to not put it away, and that pretty much summed up County`s afternoon- lots of half chances, and better, just not capitalised on.

Credit in this respect must go to Maidenhead`s defenders, who were as resilient as they were tough as teak.

I made James Comley United`s top man, including hopeful runs up the park to his basic repertoire of ankle ticklers particularly in the second half.

For County, Turnbull stood out for me as did Keano and Cowan , and whilst only on the park an hour I had Dimaio down for plaudits – his sublime passing deserving better than it got,  but with both Mulhern and Kirby held in check, there was little down for the blues which was unfortunate with the nation tuning in via BT TV.

Back at the unearthly hour of 12.30 there were a few minor surprises in store for County`s followers. Ben Jackson was on the bench, with Dan Cowan in at LB,  and Keano back in central defence, with Dimaio in the number ten shirt.

The early action was all in the visitors half, but County`s first attempt on goal, from Mulhern, sailed harmlessly over the bar.

Four minutes in, and a long throw gave Hinchliffe some useful early catching practise, but despite enjoying some possession , nothing of any real note materialised , other than some intense running  by United.

Corners resulted next as County put the pressure on the visitors back line. Mulhern had done well to hustle the first of these, and the second saw Ashby-Hammond put under much pressure by Keano.

On it went with County upping the tempo nicely, but Kirby`s snap shot was deflected wide after excellent work from Cowan.

This ushered in a corner and again Keano met it with another meaty header. It was on its way in, until Ashby- Hammond somehow managed to claw the ball out!

Another corner from that last action was cleared, and brilliant defensive work from Cowan prevented embarrassment for JG `s men as Remy Clerima darted clear.

The applause for Cowan`s excellent work was still ringing in my ears as I looked up to see Dimaio`s strike clear the bar from Bully`s cross.

Nearly half an hour had gone by, and Hinchliffe was largely unemployed, Josh Smile`s puny effort, barely reaching Hinchliffe.

Virtually all the worthwhile play was coming from the blues, we just needed to add a touch of class on the end of some decent approach play.

Then Bully took an awful tackle from behind by Akintunde. What possesses players of Akintunde`s ilk to even contemplate such crudity!? What indeed….especially way out on the right touchline! The referee responded with a yellow card, but I was far from the only one amongst the crowd of over 4600, who were dissatisfied with the inadequacies of that sanction. Ashby- Hammond just compounded my discontent by rising to pluck the pill out of the air   as the free kick pinged in.

Comley meanwhile was running through his repertoire, but almost ran himself and his team into trouble, with Mulhern in sniffing distance. It was not Frank`s day however and Comley was able to clear the danger.

The half hour mark arrived with County still winning much possession but without achieving  any success in turning it into goals. Turnbull and Kirby worked well at this point and when the ball went to Cowan , and he bypassed the defender and sped towards the box, it looked good. And then it didn`t…….as Twumasi brought Dan down as he went by. It was a fag papers width from being a penalty, but within seconds we should have had one as Bully`s kick smacked into Twumasi`s outstretched hand.

The Cheadle End were out of their seats in united accord….`penalty!`, but Mr Marsh thought otherwise, which satisfied nobody on site save the 64 who resisted the temptations of BT TV to venture northwards from Kent.

Cassidy looked to take advantage of County`s discontent next spreading play to the left flank, but with Minihan on Akintunde`s case the danger was promptly averted. We then got another exhibition of mindlessness from the visitors as Rene Steer comprehensively `sorted` Dimaio with a dreadful assault, again almost under the Danny Stand roof. Again this miserable approach to football from United only attracted a yellow and with Cowan and Dimaio distinctly unlucky in their efforts to make something from the free kick, the foul play had declared a most dubious dividend.

The pressure continued on the visitors as Dimaio and Kirby probed and searched for an opening with no reward.

The County duo continued their work, and Joe Ellul did really well for Maidenhead to keep a brilliant ball by Dimaio from the on-rushing Kirby.

Thomas sneaked a cheeky corner from nothing late on in the half, only for nothing to result as the kick came over, and  a late / late United free kick ( conceded in a scorable position )brought a vital saving header from Keane to end the half with the score still 0-0.

At this point I would like to pay tribute to the relentless support given to County ,throughout the 90 odd minutes, particularly by the Cheadle End upper tiers, and Yellow Block Poppers- it was terrific stuff and just what we need going forward !

Maidenhead were first out of their blocks upon the re-start and Walker had to look lively to nip a United raid in the bud with barely a minute gone.

County were under pressure from the off and it continued for a while, if without producing any real work for Hinchliffe to occupy himself with. County`s defence, with Turnbull covering everything that moved in front of it, were looking in no great danger, and it was irritating to see Ryan Upward stoop to clatter Dimaio as he sped clear as a result of that County defensive work. Then…almost inevitably I suppose…..Kirby`s luck was out following the free kick- his corner appeals going unheeded by the men in black!

Maidenhead kept at it however, but Cassidy`s header failed to test Hinchliffe at all, although Hinchliffe ( in concert with Minihan) did have to pull a few stops out , 6 minutes into the half, with United looking for an opening down the left.

Another 4 minutes, and we had another game changing moment, as Kirby looked on to open the scoring having suitably bamboozled the United keeper. It looked easier to score than miss, but Kirby saw his shot scrambled off the line by one of a clutch of United players who had tracked back in panic mode!

That was not good, neither was the next action that saw yet another break from deep by Dimaio cut short by a crude foul. It was Comley this time, and no card was shown at all by the referee. Comley so liked a ruck that later on he picked a fight with one of his team-mates to the brief enjoyment of the County crowd. Mr Marsh presumably enjoyed it too as he did nothing about it !

I pined for us to dish our own punishment out via the free kick that followed, but I was disappointed.

On it went, with Maidenhead continuing to venture forward, and Palmer did well to block Clerima as he surged into the box at speed. Down went the United number two like a fifties British heavyweight boxer. With Clerima warming to his role, still motionless on the deck, the travelling specs were beside themselves with rage as play went on. They did not like it at all, but I loved it and eventually Clerima re-joined us totally unscathed.

Osborne came on for a no doubt copiously bruised Dimaio shortly after the hour, getting forward straight away, but it was United, via Comley, who held sway for a while, lack of finishing nous frustrating the United number 8 ,whose cross from the left found no takers.

Kirby and Minihan both had shots charged down after this, as County struggled to make an impact, but despite some decent pressure on the visitors defence, nothing in the way of a gilt edged chance would materialise for the blues.

I guess it was not entirely a surprise, except that Hinchliffe had not up until that point needed to make one real save at all. There were just 12 minutes left when that changed, as the ball pinged over from the left and Jake Cassidy got up to send a looping header into the net beyond Hinchliffe`s dive!

Bugger……..that was a blow , and JG responded by bringing Bell on for Thomas.

Within seconds Bell and Palmer were in the action and unlucky not to nick one.

Not long after this Jackson replaced Kirby, but with just 7 minutes left we were up against it big time now!

Ashby-Hammond was a busy lad in the game`s closing minutes- doing well to keep Mulhern`s strike out with 3 minutes left.

That was probably the keeper`s best work of the half, if not the game, but he had to be on his toes as the game went into 4 minutes added time with County still looking for that elusive equaliser.

Almost at the death County very nearly leaked a second goal themselves however, conceding a free kick in a central position just outside the box. Danny Whitehall (  who had been booked a little earlier) stepped up to take it leathering the pill towards Hinchliffe`s top left hand corner. It was a good effort but the County keeper`s was better, his dive seeing him tip the ball over the bar in spectacular fashion.

Therein Ben`s workload ceased, and what remained of the game largely contained the sight of Ashby-Hammond busying himself keeping his side in the lead.

Eventually time was up, and Maidenhead could celebrate with their supporters.

For County it was not the best of starts back in Division 5, but it was not the end of the world either, and I am certain that JG will have answers sorted as we re-group and get back to winning ways, starting at Meadow Lane on Tuesday evening.

Hope to see you there!

[ Photos from a sunny Edgeley Park can be found here! ]