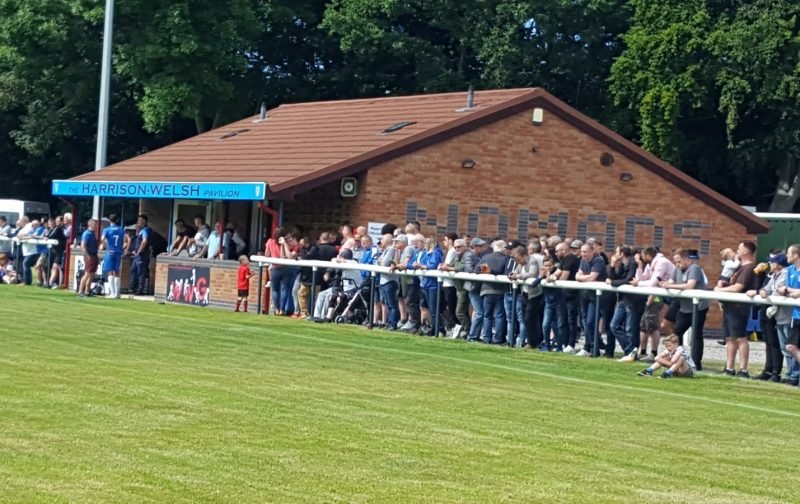 The game attracted a ground record crowd of 1020 to the neatly appointed venue , where they basked in blazing sunshine.

The score ….8-0 to County , was also a record win for this regular pre-season fixture, the Blues taking an early lead via Ash Palmer and never looking back thereafter.

There was a brace of goals from Frank Mulhern and trialist Michael Elstone to follow , together with one each from Elliott Osborne and Jake Kirby, before Szymon Czubik completed the scoring late on.

All in all it was a decent work out, and County looked sharp as you like it and primed and ready for the challenge presented to them by a season in a higher division.

County were seldom troubled at the back where Palmer and Keane oversaw a game long lock out ( Ash combining with Festus Arthur neatly in the second half to the same effect), whilst Paul Turnbull  patrolled the area in front of the County defence. On the flanks County had Cowan doing good service on the unaccustomed left flank, and Sam Minihan bombing on like a good un down the right. Sam was immense in his 45 minutes, constantly surging forward, combining with an equally effective Adam Thomas to pile the pressure on Nomads, who nevertheless  stayed honest and , too their credit, never resorted to anything FCUM like.

Up front Mulhern was as combative and lively as he ever is, that is to say considerable so……he was well worth his two goals, but then so was Michael Elstone who came on in the much changed County second half line up to steal the show. He looked a find to me .

Walker, Osborne and Walker ( 2 assists ) meanwhile all worked hard ,along with  Dimaio  and Curran but Elstone was the stand out man for me from what was  an all round good showing from the blues.

Back pre-kick off it was good to see the Man in a Hat selling the Supporters Cooperative ‘Football Season Calendar’ – a good buy which appeared to be selling well.

County attacked from the start with Minihan and Thomas in lethal  combination down the right flank, ensuring a steady flow of crosses to keep Frank and company happy.

Minihan and Thomas were flying, Mulhern shooting wide after Thomas had second the first of a plethora of County corners.

For Nomads there was Ashley  Crank but he was up to his eyes in it doing well to block Mulhern on the end of a Thomas cross, and there again a minute later to stop Thomas.

He did it again with 6 minutes gone and he must have been pleased seeing that Thomas had settled for a corner when much worse threatened, but he was wrong as Walker`s delivery from this enabled Palmer to rise to order and head the ball home.

Seven minutes…1-0 to County , who looked determined to press on for more goals- Crank having to foul Thomas this time to stop him ushering in a free kick. It was outside the box and Turnbull fancied it, only to see his kick fly wide.

Meanwhile Mulhern was battling away, but found the way to goal blocked, and then suddenly it wasn`t and his snap shot smacked into the back of the net with the most satisfying sound!

Thirteen minutes….2-0 even better, but there was a brief rally from our hosts next that saw Tez Butler deep inside blue territory. He had done well, with assistance from Kieran Herbert, but an apparent indiscretion on Butler`s part brought County the relief of a free kick.

That was all County needed and Stuart did well to keep a Minihan cross from the marauding Cowan, who was looking at home in unfamiliar territory.

The pressure continued however, and from a familiar source as Thomas threaded the ball through to Osborne who took it in his stride and passed it coolly into the net !

That was a first class finish , and the County faithful loved it!

Three nil was good…but 4 is better, and within 3 minutes it was so , as a shot on the turn from Mulhern thundered past the home keeper into the net.

The 27th minutes saw Mulhern clip the bar seeking his third, then one of Stuart or Wright brought him down just outside the box. Tyler saved Walker`s kick, only for Osborne to follow up and win another corner. Walker was centre stage again and Tyler  contrived to flap at the incoming ball allowing the lurking Kirby  to notch his first and County`s fifth goal.

Tyler was stung by this error and did well quickly…ensuring Osborne`s inciteful through ball did not put Mulhern in 3 minutes later. A decent catch from Minihan`s cross followed under pressure, but he could only watch as Keane sent his effort high and wide after Stuart had blocked Kirby`s shot.

Urged on by the busy Herbert, Stott managed to ferret his way to the by-line, but nothing further materialised for Nomads in what remained of the half as the teams went in with County 5-0 up.

It was ‘all change’ when the teams returned to the action after the break, and Ormson, Palmer and Osborne were the only one`s still out there upon the resumption for County who, like Nomads, had an almost entirely re-structured team out for the second 45.

County seemed to have Downing, Palmer and Arthur at the back with Dimaio and Stephenson operating deep on the flanks, and this worked well enough, with a cast of new faces up front.

Michael Elstone was definitely a new face, but he made an early good impression with a shot that keeper hood pushed around the post.

But the keeper followed this with a classic blooper as he failed to hold onto Czubik`s looping cross. Curran was on the ball like a flash, and in another he had fed Elstone with it and it was 6-0 as he lashed it home.

Once more County found inspiration from a goal, and the pressure was on Nomads again- Czubik seeing Hood atone by making a good save to keep his shot out, and Elstone was blocked on a run by Stuart who had had a decent game for the home side.

On it went with Curran( twice), Elstone and Czubik all going close for County, prompting a response from Nomads who , via Wright, saw their first shot on target saved by Ormson after 68 minutes.

Simpson was next to show for Nomads , who were now trying to make a decent fist of it, his header narrowly missing out under pressure from Arthur.

With 15 minutes left Thomas returned for Palmer, slotting in at RB , as County gradually set about re-asserting their command of matters.

In this respect ,Elstone was the prime mover – Hood just managing to bundle his shot off the line and around the post…….Osborne ran and ran at the home back line……and Thomas got forward to shoot over the bar.

Into the last 5 minutes, and I thought that Curran was a touch lucky to escape without even a word from the ref after stopping Simpson`s lethal looking run with an iffy tackle.

No matter….the free kick came to nothing, and County built on this welcome  modicum of good fortune by nicking one…no two goals in no time at all!

The first of these started on the left with Deven Golden whose pin point cross allowed Elstone to claim his second goal and County`s seventh from close in.

Then…with time ebbing away….came the eighth and it had a touch of the vaudevillian about it as Hood ventured outside the box to the far touchline to his left, where he then tried to bamboozle the now adjacent Czubik with his footwork. This was a bad move, as Czubik waited his moment …pounced…stole the pill and fired it into the net from way out!

Golden volleyed over from Elstone`s cross, and Czubik kept the pressure on in what remained of the game, but it stayed 8-0 to County- a decent result and a very good work out indeed!

See you all at Woodley on Tuesday !

# amended from original figure that only accounted for one side of new turnstiles. Nomads sincerely thank Blue Army for creating this record !