The Wood give County a New Year hangover. 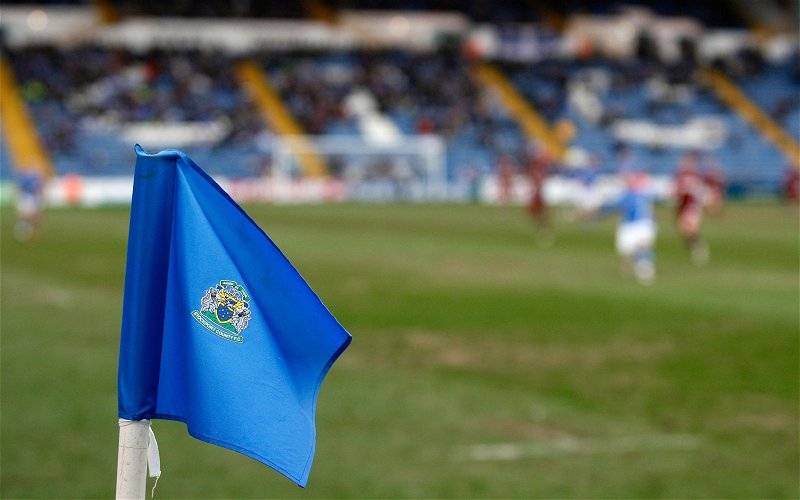 County met a side full of wit, style and skills galore in Boreham Wood today at Edgeley Park, and for the second time this season came off second best losing 3-1 to Luke Garrard`s side.

With the Wood in brilliant form in the first half, for long periods it was `no contest` as the visitors ran up a half time lead of 3-0. The fact that of their first 4 shots 3 had gone in, says much about their play, which at times was unstoppably good – their application under pressure, the constant accuracy of their passing well above Division 5 standard stuff!

With County 3 down at the break, and looking a drubbing square in the face, something was needed to sort matters, and JG acted quickly taking both backs ( Minihan and Garratt) off bringing Cowan and Rodney on, switching the Blues to 3 at the back with Cowan on the left alongside Palmer with Arthur on the right. The switch worked with Cowan reprising some of his early-season displays on the left flank. Add the fact that the other substitute Devante Rodney magicked up a goal that offered renewed hope of a County resurgence, and the result was a second-half display from County that showed considerable improvement as they toughed it out against a side still wanting more from the game as it went on.

In the end Borehamwood just had too much for us….irresistible skills going forward, allied to canny experienced defending from the likes of Tom Champion and Mark Ricketts- a potent combination!

Back at 3 o`clock, despite vivid memories of a 0-4 reverse at their place earlier in the season, the writer felt reasonably confident that County would continue their decent form from 2019 in the first game at home of the new year.

It took barely 2 minutes for that rose-tinted view to get savaged beyond recognition by the visitors, who took the lead in impressive style with their opening attack of the game.

County had been trying to work an opening, but without success, and they were caught out wholesale as Kane Smith ran the ball clear before laying the ball back to Marsh who beat Hinchliffe with a magnificent crossfield shot.

That was a shock……. TW gave us an interesting break from deep almost straight off, but Mark Ricketts stopped the rot for Borehamwood with an immaculately timed tackle.

This ushered in the visitors’ second attack of the game, and County just managed to survive the pressure that followed from corner and throw.

Keane did really good work during a couple of minutes of pressure from the ‘Wood’, and Palmer contributed as well keeping an effort from Sorba Thomas out.

Sorba Thomas was looking a real danger for `the Wood, and Marsh looked no less affective down the right- County definitely had their work cut out today , and no mistake, but they gave us something to get excited about none the less as `Woods keeper Nathan Ashmore was moved to seek Castle Street as TW ran through onto Bell`s pass.

That was encouraging, but twice after this, within 2 or 3 minutes, Keane saw shots carry the bar.

But there was  a certain precision in the visitors play that was thus far missing from County`s, added to which the blue`s were being beaten to the ball increasingly, as the `Wood restricted them to their own half, the impressive Sorba Thomas twice planting dangerous balls into the blue box.

We needed someone to ignite a flame for County, and Garratt and TW `s probing run brought them a free kick for a foul on Walker. Champion had done the deed, but it proved worthwhile for his team as Osborne`s free-kick just missed out.

We were almost smack on the midway point of the first half when things went squiffy again for County in the shape of a second Borehamwood goal.

It started with Kane Smith in behind the blue backline turning Garratt inside out before slipping an immaculate ball inside , where Marsh slammed it home to make it 0-2.

Things got a little testy next as Osborne was fouled by Ricketts and Bell thought he had been by Champion. Only one incident resulted in a free-kick and that came to nothing to dampen County spirits further.

Those spirits nearly took an additional almighty tumble next as Fermi Ilesanmi , who had been giving Sorba Thomas excellent support down the left, surged forward himself to slam a shot of thunderous power crashing into the woodwork , after the Wood Thomas had pulled the ball back from the by-line!

The Wood were building a real head of steam now and a neat Sorba Thomas pass saw Smith`s shot thud into the hoardings a foot or so wide.

County did respond just after the 30-minute mark, but Turnbull shot wide after  a melee following a corner won by County M.O.M Adam Thomas.

Credit to County, they were trying, it was just that the visitors seemed to have their number, doing just enough to keep things moving along.

County moments to point to as half time neared ……an Osborne shot that Ashmore held without great difficulty, and a better strike from Keane that the keeper could only parry. Crucially Borehamwood were able to clear their lines quickly and the danger passed.

I was tempted to get all optimistic  with a couple of minutes to go as I imagined that a couple of uncharacteristic miscues at the back by the visitors indicated the tide might be turning.

It started with a break by Sorba Thomas , who was in behind the blue backline in no time at all. From there a cross of some quality duly followed that Tshimanga  finished off with power and precision !

Buggeration……………..but it was soon half time and I could perhaps put thoughts of suicide at one side for the moment and have a warming drink from my flask.

That last comment was of course uncalled for, and it was apparent that JG had acted to resolve matters when the teams took the field again, as both Minihan and Garratt had been substituted- Minihan by Rodney and Garratt by Cowan.

County faced the second half then with 3 at the back, and hopefully renewed resolve.

The early moments hinted as much but Bell was unlucky, his early run causing a flurry of excitement.

It went on, but the Woods showed us that they were not to be taken lightly, but following Sorba Thomas`s run Tshimanga could not apply the required finish.

That was a let-off, and County looked on to capitalise almost straight away,  only for TW to fire over the bar on the break, to the disappointment of Osborne who was well placed to his left and awaiting a pass!

A small indiscretion by Ricketts almost on the Pop Side touchline ushered in a free kick for County just after the hour. Osborne duly picked Rodney out nicely and he promptly skipped beyond an intended tackle to the edge of the box where his side-footed shot went into the net off the far post.

Was that the impetus that County needed to salvage the game?

Well the Cheadle End thought so and, after the Wood went close at one end – denied by Hinchliffe, they found their collective voice almost immediately, as a cracking effort at the other from Bell was pushed around a post by Ashmore.

County were certainly making a better fist of this half than they had the first and twice in a couple of minutes Rodney went close- his first shot held by the keeper, his second following a neat chested pass by Bell , drifted inches wide.

That was encouraging as was a run by Adam Thomas, but his shot sailed over the bar.

And the Wood were not done either and it was alarming to see Sorba Thomas unleash another whiz-bang from way out wide- it went just wide, but had me fumbling for the BP pills none the less.

But County kept at it as well and no one more than Festus Arthur. Adam Thomas had just won a corner linking up with Walker, when Festus refused to allow the blue impetus to die, forcing a second flag-kick. He headed this wide which was sad, but I fancy there`s more than the odd goal in Festus to come, so keep your eyes on the lad!

County continued to work at getting a second goal, Bell`s shot fizzing wide, the prelude to some irritating time-wasting by Ashmore.

Adam Thomas was then felled comprehensively by Champion who went right through him with referee David Richardson electing to let play continue.

This ushered in a renewed effort from the visitors who had County defending grimly in response, but the defending was good and probably 4 or 5 minutes of sustained pressure still left the score at 1-3.

Thomas gave way to Mulhern for the last 10 minutes, and in those minutes County kept plugging away Palmer winning a corner that saw cries of “ handball” pierce the cold January air as Shaibu may or may not have handled in the box ( I would of course have given it- Mr R did not).

On it went as with 6 minutes left, Hinchliffe held onto a Marsh effort at the second go, seeing the ball come back to him off a post.

And again…..with 3 minutes of normal time left, a cross destined for Bell, was put behind by a defender only for a goal kick to be given by the man in black.

That was as poor a decision as the one slightly earlier that saw the Wood get a throw that should have gone to the blues at the sharp end.

On 89 minutes Rodney again slid silkily through the visitors defences to slide a lovely ball across the box to where Bell awaited its arrival smack in front. The ball arrived, but it eluded Nyal and it stayed 1-3.

The 90-minute mark saw TW fail to test Ashmore with a shot from distance.

That was pretty much that really- both teams looked to press the other into mistakes in the 4 minutes of added time , but it remained 1-3, a disappointing result perhaps tempered by the knowledge that we will not be the last team that Borehamwood will beat convincingly in what remains of the season.

No shame then…..learn from it and go again, which I am certain County will!