Under par County given their cards 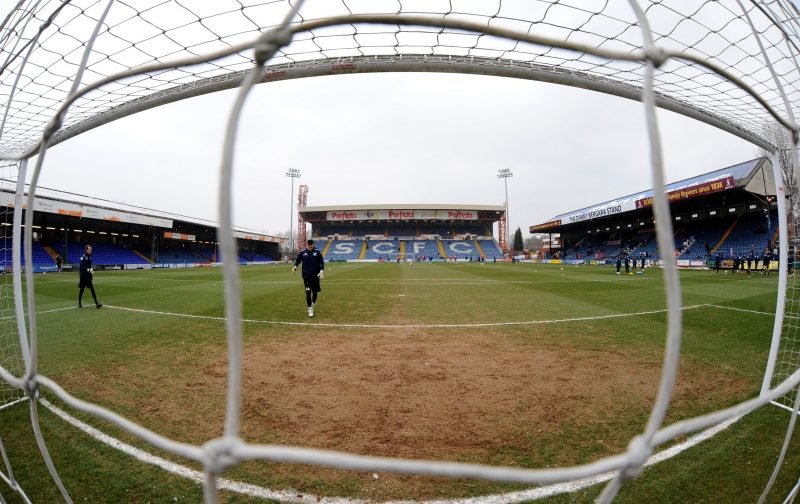 Having done so well in a clutch of long-distance away games in October, November came in blowing the rudest of raspberries in County`s direction, as they went down to a 3-1 defeat at Edgeley Park to Woking, just 2 days into the month.

The display from County was in stark contrast to the games just gone, where October saw them resolute and full of energy, today saw none of that, just a lacklustre performance that made Alan Dowson`s Woking side look top-notch.

To a degree though, they were, into County`s faces early doors, staying in that mode almost throughout a first half in which solid chances were as scarce as believable Brexit promises for the Blues.

The day started so well with cadets and veterans representing the services giving us a terrific performance of their own to commemorate Royal British Legions Poppy Appeal. It was a poignant near-perfect interlude, that should have set us up nicely for a good game and maybe 3 points for County.

But Woking had other ideas from the start and had County defending from the off, Hinchliffe in action and just managing to keep the marauding Jamra Loza`s cross from Dave Tarpey who lurked menacingly in front of goal.

Tarpey was to go on to torment County, but for now I was content to see a County response, and it looked a good one involving Turnbull and Minihan who did well , along with Thomas and Osborne, to push the visitors back, but nothing came of it.

Play then settled into a pattern, with County largely looking to break out from deep as Woking pushed them onto the back foot, and it was 12 minutes in before County could mount another decent raid, but Minihan`s cross from Bully`s pass saw Osborne snatch at his shot and send the ball wide.

Rodney went close next, missing out by inches on the break, just a minute later, so despite Woking`s purposeful play, I was by no means downcast at this point.

Or indeed, several minutes later as Tarpey made inroads through the County left flank, as thankfully Hinchliffe was on his toes and legged it quickly to the edge of the box to slam the ball in the general direction of Castle Street.

Woking were still pressing from the throw, and County probably fancied that, they could weather the storm from the resultant corner, but it did not work out that way – Jake Hyde forcing the ball home from close in.

That was a bummer, and whilst County did their best immediately thereafter to force their way back into it, nothing likely to test Ross Craig in the Woking goal could be realised.

Then, on the half-hour mark, the visitors went for it again, County having to defend 1,2…..3 corners in rapid succession, Palmer doing fantastically well at one point to deny Loza. Indeed County`s backline did well to survive that short period without leaking another goal with Hinchliffe constantly under pressure.

It went on in the same vein Hyde almost in but blocked by Palmer at the last gasp. Corner then, and more County angst as their clearance from this came straight back at them, and only a costly slip by Loza saved County`s bacon.

I thought that might just be the end  , at least for now, of the constant pressure on Hinchliffe`s goal, but I was wrong and Tarpey looked on to score as he manoeuvred himself a position from whence to shoot, sideling silkily across what should have been a minefield in front of the County box. It wasn`t and the eventual shot was fierce and true, bringing the best of responses from the County keeper who flung himself to his right to beat the shot out.

Woking were not done however, and the ball was now with beanpole Shaun Donnellan, but he drilled his shot wide to lighten County`s load at least for now.

Palmer then did well to stop Loza….. Rodney missed out for the Blues, shooting wide from a Thomas cross………Casey ended a run by Tom Walker before Woking hit the Blues on the break winning another corner.

County cleared that easily enough and from it set about a counter-attack only for Osborne to shoot tamely wide.

Into the last few minutes of the first half we went, with a free-kick putting the pressure firmly back on County, but again they responded well, and fashioned a decent break, but Craig advanced from his goal in exactly the right moment to enable him to block Rodney`s forward push.

That was better from the blues, and Thomas did exceptionally well next running the ball clear from deep only for Casey to clatter him from behind. What followed was perhaps not referee Steve Copeland`s finest hour, as he settled for a comfy chat without so much as the hint of a wave of a card in the miscreant’s direction- unbelievable?……no unfortunately par for this particular course!

Just a speculative Osborne effort (unsuccessful) followed, and that was the first half over!

I was hoping for better from the second half…much better in fact, and County opened with a roar- Minihan`s run earning a roar inducing corner, only to end with a whimper as Tom Walker`s disappointed.

But things were looking better, County were attacking now if not with the lightning speed as at Bromley or the immense ingenuity of Frank`s Dover, then with steady resolve, Garratt and Thomas probing Woking`s right flank with intent but no success.

Still County kept pressing, only for a disgraceful assault on Rodney by Rea to stop the Woking rot. It was a free-kick of course ( and Rea did see a card ), and from it Garratt fed Sam Walker, who along with Bully was keeping Woking penned in their last third rather well, but the visitors backline held to keep it at 0-1 with the hour mark approaching.

At this point JG brought Mulhern on for Thomas, and there was an instant  Frank bonus as he forced a corner almost immediately. Hopes were high when Palmer went up to meet the kick, but it was not to be and Turnbull`s follow up shot went wide.

County were trying hard to get back in it, and with 2 up the park, and one of these Frank, there were definite possibilities.

That was my view, and this was encouraged as Tom Walker and Osborne both ran at Woking`s backline sending decent crosses over. Nothing came from either though, and Loza gave County a timely warning, his run taking him into the box. His shot did not match his run however and Hinchliffe made the save with some comfort.

Gradually Woking began to work their way back into the ascendancy – Minihan and Hinchliffe doing well in rapid order with yellow-shirted forward`s threatening in numbers now.

That was a stunner, and seemed to sap the energy from County team and crowd, and Tarpey was almost in again shortly after as he tore the centre of the blue defence to shreds in his languidly deceptive style!

It stayed 0-2 though…just…..as JG moved to sort the left flank out by bringing Jackson on for Tom Walker.

Sam Walker had taken Donnellan`s wayward boot in his face immediately before this, and my hopes were high when Hamill stepped up to take the free-kick, only to be dashed as the kick sailed serenely into the waiting arms of keeper Craig.

Then almost all hope vanished next as Woking nicked a third goal. Started by Loza`s run that took him by Minihan near the corner flag. The cross was a peach and Hyde met it with the firmest of headers that thumped into the bar before descending and going in off Hinchliffe!

This signalled another wave of attacking from Woking and Hinchliffe did well to keep another Hyde header out midst it all. Palmer joined in with good work, but the ball kept coming back with interest, Hinchliffe working overtime to fend off corners and crosses.

It was the 82nd minute before County replied, but Bully`s snapshot carried the bar disappointingly.

With County 3-0 down it was heart-warming to hear Yellow Block to my right loudly singing their support- that was so good…and so…so yellow block!

Maybe it served to inspire County, as they went close not long after, just unable to apply a finish.

But Woking still had stuff to show us, and it took the bravest of saves, with his legs, by Hinchliffe to keep Hyde out, with just 5 minutes of normal time left.

Then County gave their supporters something to cheer, and it was started by Jackson whose run and cross saw Rodney strike a post with his shot. Chance gone then…..but not so…as the ball ran clear to Frank who stroked it neatly past the keeper into the net to make it 1-3!

That was a decent late effort from a losing position, and twice thereafter, in the game`s dying embers, the Blues went close again, both times via Rodney.

First off, fed by Frank, he shot wide, and then deep in added time, he dragged his shot disappointingly wide when one on one with the keeper.

Game over- game lost, and a long way from being a good County showing.

Plenty for JG to do then, but his record shows us that that is what he does best, and he has never failed us at all, and I for one have every confidence he will sort matters if we follow Yellow Block`s example and get behind the team and our Manager.

2 Replies to “Under par County given their cards”