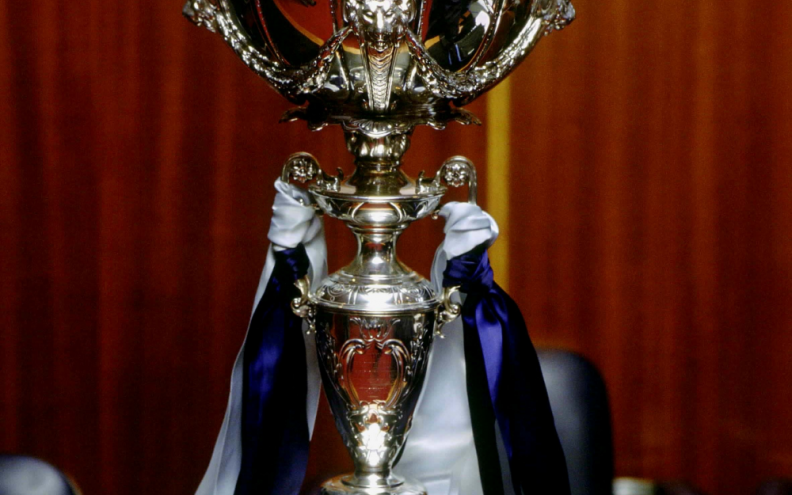 It was County`s considerable misfortune, to match themselves against Dorking Wanderers, a side in superb form, for the second time in 4 days, at Edgeley Park last night, where they exited the F A Trophy after a 4-0 drubbing at the hands of the  National South outfit.

Dorking were again in irresistible form, but this time had their finishing skills suitably honed complementing some excellent play with goals of commensurate quality.

County simply had no answer as goals from McShane and McMahon before the break, and a Briggs brace after sealed a massively impressive win for the Surrey side, who in this form will walk promotion to the National this season.

County did get a glimmer of hope just before half time, but after failing to punish Briggs in any way after he slammed into Jackson like a lunatic near the left corner flag, Ben Speedie, a hapless caricature of a referee, then ruled Thomas`s header out buying Gallagher`s dying swan act hook line and obvious sinker with no one within the proverbial country mile of him.

Given…..and 1-2 was almost manageable, but having the goal ruled out was a  serious bummer as far as County were concerned.

All that said, Dorking were a class act, playing themselves out of danger with football not hoofball- it was far above National South standard in my view, and amazing to watch on the coolest of January evenings!

I will try my best to point out prime movers for Dorking within the report, but as far as County were concerned Adam Thomas was stand out man again and distinctly unlucky not to be on the score sheet.

Just over 1100 were inside EP at the start giving the stadium an eerie feel-near silence prevailing at times. There were 22 real supporters present in the away block, and for their admirable support of their team, a great night was pending.

None of that was known though as County took the field with a couple of changes, JG giving a welcome rest to both Festus Arthur and Elliott Osborne, Tyler Garratt and Sam Walker stepping in, the latter playing alongside Paul Turnbull who was playing his 250th game for the Blues.

If I was waiting for County to open brightly and for Dorking to gently ease themselves into their studious football game, I was in for a quick re-think. Yes, County looked to open with a zing but early runs by Jackson and Garratt were put to bed promptly by decisive work by Gallagher and Briggs. Garratt though saw a dipping drive go inches over, so I was not overly angst-ridden in the first couple of minutes.

Then I was….. as the excellent Niel McManus combined with Briggs to send him hurtling through at speed down the right. Thankfully Garratt was on hand to block the danger albeit at the cost of an early corner. This caused County real issues, and they did not deal with them. Instead, the kick from Briggs was back in the danger zone as County could not clear the ball decisively. Briggs sent it back again for Sole to head on to McShane whose shot eluded Hinchliffe going in off the foot of a post.

That was a lethal start from Marc White`s side. County tried to redress matters quickly but Garratt`s cross saw Turnbull`s header fly over the bar.

For now…that was pretty much the sum total for County, as Dorking were on the ball and buzzing about busily and I was relieved to see a shot by Briggs cannon into Keane rather than the back of the County net, 8 minutes in.

The game was only 10 minutes old and McManus was already shaping up as the visitors` prime mover, his run to the by-line ending with a dangerous ball from him fizzing menacingly across the goal with nobody in yellow able to respond.

Another 5 minutes saw no improvement for County as Wanderers pegged them back with some splendidly joined-up play. Briggs fancied his chances midst all this only to be blocked by Garratt when it mattered. But County continued to be surrounded by what looked like 13 or 14 yellow shirts at times, and the danger was only averted by good work from Palmer as Sole bore down on goal.

I was looking for some respite for the blues, but in vain as Hinchliffe managed to keep a drive by McShane out just a minute later.

It was still 0-1 at the 20 minute mark, but only because Sole made a wakes of applying a finish to Mc Mahon`s brilliant pull back from the by-line.

This looked to have encouraged County, but their quick counterattack saw the combative but highly capable Sam Beard block Minihan`s effort. From Beard and Richards the ball was sent with Exocet accuracy across the park to where McManus lurked with malice aforethought! McManus`s drive was totally in keeping with the move that set it up- a thing of beauty, and the Cheadle End responded with applause as the ball crashed beyond Hinchliffe into the net…..0-2!

This was a hammer blow to County`s hopes. They responded bravely enough via Cowan and Thomas but, marshalled magnificently by Isaac Philpot, the Dorking backline defended the threat well.

It was good to see County keep trying to take the game to Dorking, but despite great work and energy from Thomas it was the visitors refusal to waste a pass or go for the easy option that continued to hold sway.

That said, the 27th minute saw County on the front foot as Keane teed Thomas up for a cross that Gallagher did well to keep from Bell. Some naughtiness was in evidence at the back of the box when Turnbull`s subsequent corner whizzed over, but Mr Speedie was as alert to what was going on as he normally is, that is to say…not at all, and the danger was over.

It continued largely in the same vein with Dorking giving a running/ passing master class whilst County tried in vain to respond effectively- Turnbull seeing a shot blocked, and a Cowan cross finding nobody in blue able to force a decent chance home.

That was 31 minutes in, another 2 and JG had replaced Bell with Mulhern, and County won a series of corners in rapid succession, Huk doing well at times under pressure and at others just glad to see the ball deflected behind off a colleague.

Eventually the siege was lifted, almost inevitably by Mc Mahon whose run from deep looked ominously lethal for a time until his progress was halted before he reached the box.

County got a free kick next and Palmer fancied it but without so much as a scintilla of luck.

There then followed several minutes of concerted pressure from Dorking, ended when Briggs drilled his shot wide.

Two minutes added time had just been announced when a run involving Thomas and Frank resulted in Beard conceding a corner. This was cleared by Wanderers without issue, but County came back at them only for their progress to be temporarily curtailed by a couple of poor fouls by Dorking defenders, the second of which saw Briggs comprehensively clatter Jackson.

I understand that the referee then gave a free kick for the original foul, but he then took absolutely no action, not even his preferred option of a nice friendly chat, against Briggs. No matter, we would score from the free-kick would we not! Well yes….we did, but after Thomas headed home, Speedie went full-on for irony by ruling it out as he had clocked Gallagher`s falling down moment apparently executed in splendid isolation!

That was the first half over then and there was a massive hill for County to climb in the next 45 minutes or so.

This started with Osborne on for Sam Walker, and Mulhern heading wide from a Thomas cross.

But it was not long before play concentrated at Hinchliffe`s end where, with Philpot guarding the back door with his well-drilled cohorts, and with McShane and Briggs working the left flank, and Richards with Moore handling the right up the park, allowing McMahon to boss the show whenever and from wherever he chose.

The 54th minute though saw Huk have to look sharp to hold onto a shot from Cowan, so there was notionally still hope.

At last we were beginning to tick over better but, 10 minutes into the half, Thomas`s shot drifted millimetres wide!

But it was not on for the Blues to get slap-happy, and I was grateful to see both Richards and Moore throw away decent chances around this time for Dorking. A Corner followed, but County cleared this easily enough, and Beard did brilliantly to deny Minihan on the break from this.

More pressure from Dorking followed…then another save by Huk from Thomas as the hour mark approached.

Osborne was offering something extra it seemed now, but his surging run was cut short by a foul as he approached the opposition box. No response from the referee was par for the course, and I winced as Frank`s follow up shot flew wide.

Free kicks for both sides came and went next without adding to the score, but I was getting progressively twitchier now as Dorking looked to be revving their machine up once more- Moore fluffing a chance to score from Beard`s pass with 25 minutes left.

Then County were hit by another tremendous strike from Wanderers! A superb move unfolded before our eyes capped emphatically as Briggs slammed the ball home from close in off Moore`s cross!

Dorking were 3-0 up, and after another 5 minutes it was 0-4 as Briggs` surging run saw Hinchliffe save his initial strike. The County keeper could only parry the ball however and Briggs was able to slam the loose ball home!

Festus Arthur came on for Keane at this point, with Dorking key man McManus giving way to Membrilliera.

Were Dorking now content with 4? Probably, but their fans were definitely not, and County did their best with time running out to get something from the ashes of the evening!

Corners came…went…Palmer strove to force one of `em home, all without success. Thomas was excellent during all this and fully deserved the M.O.M award, but that back door……Dorking had eyes on picking the lock for a fifth time, the excellent Philpot embarking on a blistering charge up the park after blotting out a County raid. He put just too much oomph on his pass to Richards though, and the break drifted wide and lost momentum.

Festus was seemingly enjoying his late cameo and getting forward encouragingly – a shot from him being pushed around the post by Huk.

Maybe my view that Festus would be worth a punt at centre forward is a footballing bridge too far ( although I am far from convinced of that) but he could be used as a (attacking?) midfield option.

I have just had a word with myself and will stop this mental incontinence now, and just report that County kept trying …Osborne`s shot deflected wide, Festus forcing another corner which Palmer again salivated over but could not force home.

Soon the game was over and Dorking had deservedly won through to the FA Trophy 3rd Round and a clash with the classless AFC Fylde against whom I wish them all the best knowing that Wanderers will very likely do to them what they have just done to ourselves.

Meanwhile, in time-honoured fashion, we can now concentrate on the National League, starting with Sutton United , at Edgeley Park, on Saturday.

I am sure County supporters will turn up in numbers and give their usual good support as we look to consolidate our position at the top end of the table.

See you Saturday then!