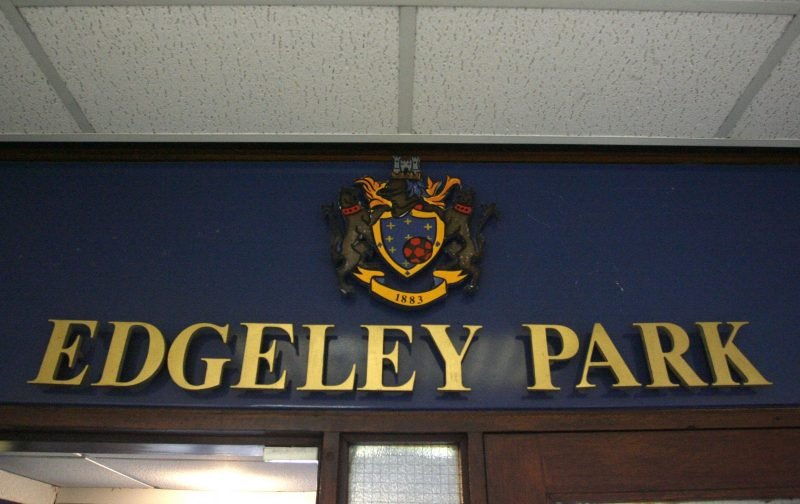 What a fantastic performance…what a superb finish…..what a deservedly wonderful result, as County, borne on by a wave of emotion achieved the neatest of victories at just about the last gasp at a damp Edgeley Park today!

The margin was 1-0, the opponents Peter Taylors well-drilled Dagenham & Redbridge side, who would have been mortified to concede so late on in what had developed into a pulsating encounter.

But the second half was largely dominated by County, and it was absolutely fitting that, with promotion hero Liam Dickinson watching in the stands, a player hewn from many of the same essentials, Nyal Bell, stepped up to apply the vital finish to the last of many County attacks in a distinctly lively second half.

County did not have all the stars on show ( I thought that Manny Onariase was immense for Dag & Red, keeping County at bay with a multitude of timely interventions) but they had a few of `em, the pick for me being Minihan, Keane, and Devante Rodney, and I give a big shout out also to Tyler Garratt whose input late on kept County in it with the visitors threatening on the break!

Other than that I did not feel anyone let us down, and JG got everything spot on as well, first off with the bravely unexpected swapping of Osborne and Keane for Sam Walker and Paul Turnbull, and then with his subs. Jackson is proving an impressive substitute and was unlucky not to nick one today, and whilst Bell may lack Frank`s smooth skills at times, he can do the biz himself at others and the 93rd minute today saw him do just that- `nuff said!

In truth the first half gave us few clues as to how this one would finish up, both sides probing the other with diligence but with  little in the way of cutting edge on show to round it all off with, but County opened on the front foot and it was the familiar footsies of Minihan and Thomas that led the charge.

I was already liking Rodney`s input too, and so willed him to score but the first shot of the game, from him, was held comfortably by Elliott Justham in the Daggers goal.

A period of early blue pressure threatened to subside, 3 minutes in, when Reece Grant burst clear, but a foul by him on Arthur nullified that one and set County off again.

Minihan won a corner from this, but Palmer headed wide, then Tom Walker joined the fray his shot being deflected for a second County flag-kick, which saw Arthur`s header climb over the bar.

The first 7 minutes were pretty much all County, but the next 7 saw the visitors reply with some determination, bringing the best out of Minihan as a series of crosses pinged over into the blue box.

Nothing really materialised for the Daggers though, Joe Quigley disappointing the 75 true supporters in the away block by twice lifting limp efforts into the Cheadle End.

For a moment, with Reece Grant running onto a long punt from keeper Justham, things looked likely to improve for County`s opponents, until Hinchliffe advanced out of the box to head the danger away.

Eventually, County raised the siege, and a foul on Minihan put the pressure back on Dag & Red via the free-kick that saw Arthur`s header deflected for a corner. Things looked up from this but the referee ( Mr Martin Woods) looked away as Arthur plummeted to earth under pressure in the box, and the following play ended with Walker`s shot rattling the advertising hoardings a foot or so wide.

We were almost halfway in the first half now, and I was also liking Keano`s play, his latest interception, on 22 minutes, almost seeing Rodney in – only the swiftest of reactions from Justham saw the threat off!

County were building the momentum nicely now, but when Thomas played the ball inside to Frank, he drilled his shot inches wide.

It went on with Justham in action again to deny Walker, then making light of yet another County corner.

That was the 31st minute, another 60seconds and it was Hinchliffe doing the biz at the other end, and somehow it stayed 0-0 as Quigley`s goal-bound effort was tipped around the post by the diving County keeper. That was a brilliant save, and Hinchliffe sorted the follow-up corner as well to keep County afloat.

Yes, Dag & Red were looking lively now, and they must have been disappointed again to see a neat drive from Matt Robinson miss out by inches not long after.

But County were not to be cowed, and both Osborne and Mulhern went close, Frank mere inches from reaching a peach of a cross from Keano.

Rodney was still working impressively hard, but with nothing resembling luck, his cross narrowly missing out with half time approaching.

The period to the break saw County play some neat football, but there was the odd irritation in the mix as well, namely after Thomas had won another corner, the ball was played back to Hinchliffe who wellied it out.

I nitpick of course and was happy to see Quigley`s latest effort just fail to dip under the bar almost on half time.

The half soon ended , and with County kicking towards the Cheadle End, in the second half, hopes were high for them to push on.

Early pressure from Dag & Red opened the second half, being halted via a break by Walker, but his cross saw Mulhern`s shot smothered by the keeper.

If that was disappointing, County did not dwell on it, some decent moves following, if without a finish to match, the ball at one point flowing twixt  Rodney, Thomas and Minihan sweetly. Daggers were happy to concede a corner therefore, Justham beating Palmer to it if narrowly!

If the blues were enjoying the majority of possession, there was always the possibility of a break by Dag & Red and a long punt from Justham ushered in just such a moment with Grant running onto it. He had Hinchliffe to beat, but chose the moment to lose his footing allowing Hinchliffe to make the save keeping it at 0-0.

The pressure continued from County, with both Rodney and Walker going close. Mulhern might have gone even close, surging clear deep into Daggers territory. He was covered by Onaraise, and his block was superb, making Justham`s job simple dealing with the shot that followed.

Back surged County via Rodney, but Ken Clark did a small miracle to block the shot.

There was time for Palmer to save the day for County with some neat work as the visitors tried to hit the blues on the break, but it was still mainly County doing the attacking.

We were beyond the hour mark now, and both Minihan and Garratt were tormenting their opponents going forward, Garratt`s cross seeing Frank crash to earth , under pressure from the excellent Onariase, triggering the most overemphasised mime from the ref indicating he was not interested. I thought Mr W had a reasonable game, so we`ll let that one slide!

Things were definitely warming up now from County`s viewpoint, we just needed an element of calm to descend on them with the odd `foot on ball` moment thrown in, but when Rodney pinged in another tasty morsel for Frank to gorge himself on, his shot flew up and over the bar!

Not long after, JG replaced Frank with Bell, as County continued to pile on the pressure- Walker`s shot thudding into the boards just a foot wide with 20 minutes left.

At this point JG moved again to bring Jackson on for Thomas, giving new emphasis to the County attacking momentum down the left flank.

The County attacks continued- Andy Eletherion  looked to find the reservoirs in extremis…but they continued, Keane ever so close with a shot that was deflected behind for the blues umpteenth corner.

With Jackson and Keane gnawing away at this like two lions encircling yer wildebeest, Justham did well to punch clear under pressure, but County would not go away, particularly Jackson whose follow up effort thudded into the crossbar with a vengeance.

No luck….no luck at all…the ball stayed out…..and Minihan did really well in the aftermath to clear the ball after an alarming break by substitute Chike Kandi put the skids briefly under the blues.

It went on……Bell sent clear…then not, as Dag & Red re-grouped in lightning speed to snuff the threat out.

That was disappointing, as was another block from Onariase on another Jackson cross.

There were just 10 minutes left now, and despite County`s dominance, the game was still anyone`s to win!

It was at this point that Garratt proved his value with a brilliant block with McQueen apparently about to score- excellent!

On 82 minutes, County replied through Osborne, but Bell could not get anything on the cross.

Another brave block by Garratt did not save him from being substituted – Dimaio coming on to a chorus of his favourite melody in his place.

It was late now, really late, and there was urgency in everything County were doing, but Dag & Red were resolute in their response, as half-chance/ chances came/went with the score staying the same.

Then Onariase stepped up again to remind us he was still about and an imperious block by him snuffed out a break by Bell brooking no argument!

Into added time we went with County piling the pressure on still, and Dag & Red doing their `thou shall not pass` bit to apparent perfection, then it all slotted nicely into place for County, as after an almost constant barrage of blue attacks they won yet another corner.

A huge crowd were excitedly lining the barriers behind the Cheadle End goal as Ossie`s kick came over, and they all went AS as Bell met it heading the ball in a downward trajectory into the net!

Deep joy….game won…and it was, and County were up to 13th as a result.

If we can just build on this, get Stephenson back to full fitness eventually and back in the team, and we can look forward to making more progress, starting with Barnet next Saturday ( still seats on the Flyer at £30).

I am well made up with that win, well deserved!

See you at Barnet then.

One Reply to “Last Gasp Bell sees off Daggers”